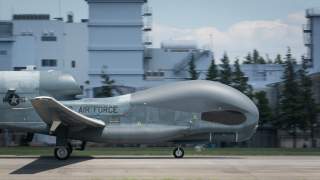 The U.S. Air Force all but admitted that it feels comfortable deeply cutting its fleet of Global Hawk spy drones because it’s acquiring a classified drone type. Mostly likely the stealthy RQ-180.

The Air Force in its budget proposal for 2021 is asking Congress for permission to retire scores of aircraft, including 17 B-1 bombers, 44 A-10 attack planes, 24 C-130 transports and 29 aerial tankers.

Perhaps most surprisingly, the flying branch also wants to cut 24 of its 34 high-flying Global Hawks. The older Block 20 and Block 30 versions would retire while just 10 of the latest Block 40s would remain in the force.

The Air Force claimed the retirements would save it $21 billion over five years.

The service already is acquiring direct replacements for many of the planes it wants to retire. Nineteen new C-130Js would replace the C-130Hs. Fifteen new KC-46s would mitigate the loss of older tankers, although the Air Force admits that the KC-46 isn’t yet combat-ready owing to design flaws.

Recent lots of F-35 stealth fighters would actually grow the Air Force fighter fleet despite the proposed reductions in A-10 squadrons and Pres. Donald Trump’s diversion of military funds to his border-wall project.

The B-1s the Air Force wants to ax are so-called “hangar queens” that rarely fly owing to overuse over Iraq and Afghanistan and subsequent maintenance shortfalls. New B-21 stealth bombers are on track to take the place of the B-1s starting in the mid-2020s.

But the Air Force won’t say what it would deploy to make up for the gap in aerial surveillance that would result from a three-quarters reduction in Global Hawk patrols.

No regional combatant commander ever wanted less surveillance. And service leaders made it clear that something is available to take the place of the Global Hawks.

“Most of what we’re giving up is unclassified,” Air Force chief of staff Gen. David Goldfein told Defense News. “On the minus column you’re going to see things that are real, that are flying right now that are all legacy, real legacy capability. It’s a real risk to combatant commanders today. What we’re buying — not all but a lot of it — is in the classified realm.”

Goldfein probably in part is referring to the RQ-180, a stealthy, flying-wing surveillance drone that reportedly entered service in 2017.

The Air Force has never officially acknowledged the existence of the Northrop Grumman-made RQ-180 drone. Trade publication Aviation Week in 2013 broke the news of the drone’s development. The magazine on Oct. 24, 2019 followed up with an in-depth feature tracking the unit changes that could support a fleet that, at the time, reportedly numbered at least seven RQ-180s.

“There is a growing body of evidence that the stealthy vehicle is now fully operational with the U.S. Air Force in a penetrating intelligence, surveillance and reconnaissance role,” Aviation Week reporter Guy Norris wrote in 2019.

The RQ-180 reportedly is similar in shape to the Northrop-designed B-2. The unmanned aircraft is smaller than the manned bomber is, however, and also features design improvements that Northrop also is including on the new B-21 bomber that the company is building for the Air Force.

The RQ-180 first flew in 2010, Aviation Week reported, finally allowing the Air Force to penetrate enemy air defenses with a far-flying reconnaissance craft. The service last possessed that capability in the late 1990s in the form of the Mach-three SR-71 manned recon plane.

The Air Force reportedly tested the roughly 170-feet-wingspan RQ-180 at Groom Lake, part of the Area 51 complex in Nevada. “In 2009, with Northrop well underway on low-rate initial production of the RQ-180, the Air Force began preparations to evaluate the new vehicle and established a flight-test organization at Groom Lake dubbed the ‘Mad Hatters,’” Norris wrote.

It’s possible, even likely, that the production of the RQ-180 accelerated following its initial entry into service. It’s not at all clear how many RQ-180s the Air Force has and how many more it wants to buy.

But if the Air Force is comfortable putting 24 Global Hawks in storage over the next five years, it’s a safe bet it has a similar number of RQ-180s on the way to replace them.