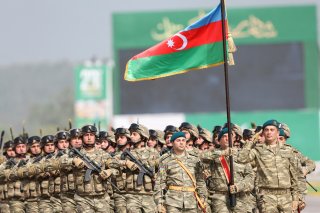 In the early hours of September 13, 2022, Azerbaijan launched a full-scale invasion of sovereign Armenian territory. In the fierce fighting that followed, over 200 people were killed and many more wounded. While Azerbaijan has frequently launched border incursions to extract territorial concessions from Armenia, the latest attack represents a striking escalation in both the scale and intensity of the violence and demonstrates Azerbaijan’s increasing appetite for Armenian territory.

The conflict between Armenia and Azerbaijan is rooted in the disputed status of the Nagorno-Karabakh region. Since 2020, however, Azerbaijan has extended its territorial claims to Armenia itself—focused on what Azerbaijani officials refer to as the “Zangezur Corridor,” a portion of Armenia separating Azerbaijan from its exclave of Nakhichevan. Azerbaijani president Ilham Aliyev has openly boasted that Azerbaijan would “be implementing the Zangezur Corridor, whether Armenia wants it or not” and threatened to “solve it by force.”

Azerbaijani forces soon followed up on Aliyev’s threat by occupying portions of Armenia’s Syunik and Gegharkunik provinces in May 2021. Last week’s invasion represents an even more serious attempt to capture Armenian territory, with attacks along the entire length of the border and intense shelling that forced schools to close and thousands to flee their homes. While a ceasefire agreed to on September 15 halted further attacks temporarily, Aliyev will almost certainly renew his invasion if he is not decisively deterred.

The prospect of another Azerbaijani invasion poses a serious threat to Armenia’s existence. Azerbaijani officials have routinely made territorial claims to vast swaths of Armenia with the boast that Azerbaijan is “rewriting” history—a reference to its ongoing campaign of cultural erasure. Baku has openly discussed plans to create a “buffer zone” on Armenian territory—an obvious euphemism for a major land grab. On September 20, an Azeri parliamentarian called for the establishment of a “Goycha-Zangezur Republic,” implying the occupation of half of Armenia.

Azerbaijan not only has threatened the Armenian state; it is hostile to the continued existence of the Armenian people. The Lemkin Institute for Genocide Prevention has warned that Azerbaijani government statements amount to “a continuous intent to destroy Armenian identity & territory.” The drumbeat of genocidal rhetoric from Baku has echoed in a long series of brutal atrocities against Armenians, tacitly sanctioned by the Azerbaijani regime.

In 2004, during a NATO-sponsored training program in Hungary, Azerbaijani Lt. Ramil Safarov broke into the room of his Armenian colleague Lt. Gurgen Margaryan and murdered him with an axe. Safarov was sentenced to life in prison in Hungary but in 2012 was extradited to Azerbaijan to serve the remainder of his sentence. Upon his return, however, Safarov was immediately pardoned by Aliyev and given “a new apartment, eight years of back pay, a promotion to the rank of major and the status of a national hero.”

In April 2016, during the Four-Day War launched by Azerbaijan against Nagorno-Karabakh, Azerbaijani forces beheaded Kyaram Sloyan and posted “shocking souvenir photos of uniformed Azerbaijani soldiers posing with the severed head” to social media. Despite the photographic evidence, Azerbaijani officials denied the beheading had taken place and took no measures to hold the soldiers responsible accountable.

Azerbaijani soldiers committed another wave of atrocities during the 2020 war, again posting evidence of their crimes online. One video depicts Azerbaijani special forces executing two captured Armenians who had their hands bound and Armenian flags draped over their shoulders. Two grisly videos show separate incidents of Azerbaijani soldiers beheading elderly Armenian civilians. There are numerous other documented examples of Azerbaijani soldiers abusing prisoners of war, cutting off appendages, and desecrating dead bodies. In the aftermath of the war, Human Rights Watch reported that Azerbaijan had subjected Armenian prisoners of war—many of whom are still held captive—to “cruel and degrading treatment and torture.” While international pressure forced Azerbaijan to announce it would begin an investigation into four soldiers, no further action was taken and one of the soldiers subsequently received military honors.

Multiple videos filmed by Azerbaijani soldiers during the recent invasion show them posing with the mutilated bodies of Armenian soldiers. One shocking video shows the body of Anush Abetyan, a female Armenian soldier, stripped naked, with writing across her torso, a stone placed in her eye socket, and her severed finger in her mouth. A similar video shows the body of an Armenian military nurse, also stripped naked with her hands and legs cut. Azerbaijan’s apologists tried to offset these shameful episodes by sharing footage of an Armenian prisoner receiving first aid for a shoulder wound. Days later, Azerbaijan returned the body of the soldier, Davit Gishian, in an exchange, leading Canadian journalist Neil Hauer to reflect that “it is highly likely he was killed in captivity.”

Azerbaijan’s invasion comes at a pivotal time for the South Caucasus. Russia, long the dominant regional power and Armenia’s nominal security guarantor, is on its heels in Ukraine and its military has been exposed as outdated and ineffective. Following Azerbaijan’s clear violation of Armenia’s sovereign borders, Armenia appealed to the Collective Security Treaty Organization (CSTO) under its mutual defense clause. But the CSTO’s only response has been to launch a fact-finding mission, a clear signal that Russia will not respond to Azerbaijani aggression. With Russia unable or unwilling to exercise influence in the region, a vacuum has been created—one that can lead to the strengthening of a rules-based international order or to chaos.

Supporting Armenia’s defense against Azerbaijan’s invasion is a natural extension of American foreign policy under President Biden. In a 2020 Foreign Affairs article laying out his foreign policy vision, Biden wrote his presidency would “put strengthening democracy back on the global agenda.” Since taking office, Biden has largely lived up to this vision, organizing the Summit for Democracy in December 2021 and providing vital military aid and support enabling Ukraine to defend itself against Russia’s invasion.

Recognizing the necessity of action—to support Armenian democracy, fill a vacuum left by Russia, and bolster a rules-based international order—the United States has palpably increased its activity in the region in just the past week. This was most apparent in House Speaker Nancy Pelosi’s snap visit to Armenia, a move she cast as symbolic of a “firm commitment to a peaceful, prosperous and democratic Armenia.” Vitally, the United States’ involvement goes beyond mere statements, with Alen Simonyan, Armenia’s Speaker of Parliament, highlighting the important role the United States played in bringing about Thursday’s ceasefire.

While pro-Azerbaijani sources have seized on Armenia’s ties with Russia, a relationship Armenia reluctantly maintains to protect itself from Azerbaijan, Pelosi and other high-ranking U.S. officials have wisely looked to the fundamental alignment between American and Armenian interests. The democratic transition that followed Armenia’s 2018 Velvet Revolution—undertaken at significant risk of alienating Armenia’s only security guarantor—was a compelling demonstration of the Armenian people’s desire for democracy. Discontent with Russia’s failure to prevent Azerbaijani aggression, Armenian society has been moving closer toward the West—a shift that could become permanent in the wake of Russia’s failure to abide by its treaty obligations. Although Armenia still faces challenges on its road to democracy, it has earned a “Partly Free” designation from Freedom House, the same designation received by Ukraine.

Azerbaijan, on the other hand, is a hereditary dictatorship that has been under the control of the Aliyev family since 1993. Azerbaijan is scored well below even Russia by Freedom House, and like Russia, is classified as a “consolidated authoritarian regime”— Freedom House’s worst designation. While Aliyev makes rhetorical overtures to Europe—and has spent $2.5 billion in illegal bribes to whitewash Azerbaijan’s reputation—his true allegiance lies with Vladimir Putin and his fellow autocrats.

European Commission president Ursula Von der Leyen recently hailed Aliyev as a “reliable” partner after the two struck a deal to increase gas exports to Europe by 2027. However, the amount of gas Azerbaijan can supply, even at the promised levels, remains just a fraction of the amount needed to replace Russian gas. Even more damningly, Lukoil, a company closely linked to Putin, owns a 19.99 percent stake in Azerbaijan’s gas fields. Rather than allowing Europe to diversify its energy supply, Azerbaijan serves as a Trojan horse for Russian gas. Indeed, in February, just days before Russia’s invasion of Ukraine, Aliyev struck an alliance with Putin to coordinate exports to ensure Azerbaijani gas did not compete with Russia’s.

Azerbaijan’s alliance with Russia goes much deeper than gas exports. Azerbaijan has spent billions of dollars to purchase arms from Russia to use against Armenia. Aliyev has acted to increase Russian influence in the region, most notably by launching the 2020 war that resulted in a dramatic increase in Russian leverage. Furthermore, since 2020, Aliyev has sought to minimize Western mediation of the Armenian-Azerbaijani conflict, calling the Organization for Security and Co-operation in Europe (OSCE) Minsk Group “dead” and preferring to negotiate via Russia. Tellingly, and in sharp contrast to Armenia, Aliyev chose to credit Putin rather than the United States with facilitating the recent ceasefire.

This global alignment of dictators was on full display last week at the Shanghai Cooperation Organization summit, a group frequently referred to as a “Club for Dictators.” Aliyev traveled to Samarkand to meet with his fellow dictators, where he was photographed enjoying a meal with Putin, Turkish president Recep Tayyip Erdogan, and Ayatollah Khomeini, among others. As has long been noted, autocrats tend to support their fellow autocrats over democracies, and this nascent alliance of dictatorships represents the most serious long-term challenge to U.S. support for global democracy.