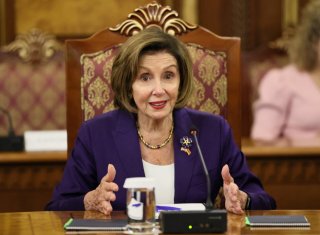 Speaker of the House Nancy Pelosi traveled to Armenia on Saturday following clashes along the country’s disputed border with Azerbaijan—marking the most serious violence between the two countries since the end of the Second Nagorno-Karabakh War in November 2020.

Pelosi is the highest-ranking U.S. official to visit Armenia since the Caucasian nation’s independence from the Soviet Union in 1991. The speaker came at the head of an American delegation including Reps. Jackie Speier (D-CA) and Anna Eshoo (D-CA), both of Armenian descent, as well as Rep. Frank Pallone (D-NJ), the chairman of the House Energy and Commerce Committee. The U.S. embassy in Yerevan, Armenia’s capital, indicated before the visit that Pelosi would meet with Armenian prime minister Nikol Pashinyan, according to a statement posted on its website.

Pelosi’s visit comes after renewed clashes between Armenian and Azerbaijani troops, which led to the deaths of at least two hundred soldiers. Although both Yerevan and Baku have blamed each other for the outbreak of violence, Pelosi singled out Azerbaijan for criticism, arguing that it had launched “illegal and deadly” border attacks against Armenia that had prompted the Armenian government to retaliate.

“We strongly condemn these attacks,” Pelosi said, claiming that the fighting “was initiated by the Azeris and there has to be recognition of that.”

The government of Azerbaijan denied Pelosi’s claim, and its foreign ministry described her accusations as “unsubstantiated, unfair … [and] unacceptable” and accused her of succumbing to “Armenian propaganda.”

Pelosi’s accusations against Azerbaijan also extend well beyond previous remarks by U.S. State Department officials on the clashes. In a recent statement, Secretary of State Antony Blinken condemned the fighting and called for a ceasefire but did not attempt to apportion blame for the incident.

Armenia and Azerbaijan have fought two wars—first during the final days of the Soviet Union from 1988 until 1994, and again in 2020—over the disputed Nagorno-Karabakh region. During the first war, an ethnically Armenian proto-state, the Republic of Artsakh, was established in Nagorno-Karabakh. It gained control over nearly all of the contested territory following Armenia’s victory in 1994 but ceded more than half of it to Azerbaijan in 2020 as part of a ceasefire. No United Nations member state recognizes Artsakh, although it has relations with three other Russian-aligned proto-states—Abkhazia and South Ossetia within Georgia and Transnistria within Moldova.

The Second Nagorno-Karabakh War lasted for six weeks and resulted in more than 6,000 fatalities and tens of thousands of injuries. Although Armenia and Russia have a collective defense agreement, Russia refused to directly intervene in the conflict but roughly 2,000 Russian peacekeepers have been deployed to the Lachin Corridor, which connects Armenia and Artsakh along the disputed border as part of the peace agreement.