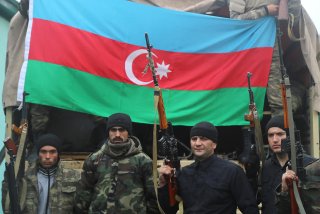 It has now been almost eight months since Azerbaijani forces, together with Turkish Special Forces, and Syrian Islamist mercenaries, and Israeli drones attacked Nagorno-Karabakh and the self-declared Republic of Artsakh. At least seven thousand people died during the forty-four-day war that ended with the sudden announcement that Armenia and Azerbaijan had both accepted a Russian-imposed cease-fire.

The terms of the cease-fire turned decades of Minsk Group diplomacy on its head. The march of Russian peacekeepers into the region to separate Armenians and Azerbaijanis and Turkey’s dispatch of troops and intelligence agents to staff “monitoring” centers obviated earlier understandings that no peacekeepers would come from among the countries co-chairing the Minsk Group or include Armenia or Azerbaijan’s neighbors.

That unilateral revisionism was bad enough but the State Department has subsequently dropped the ball on ensuring that Russian and Turkish monitors and Russian peacekeepers actually do what they say. Consider three ongoing problems.

First, Russia and Turkey have a joint monitoring operation in Agdam, an Azerbaijani district under Armenian control until its return to Azerbaijan in November 2020.  Russia is the co-chair of the Minsk Group and Turkey is a member. Still, neither Turkey nor Russia has shared information and monitoring reports derived from their joint operation with Organization for Security and Co-operation in Europe-recognized parties to the conflict such as Armenia and Artsakh, nor with the U.S. and French co-chairs. A belief within the State Department that Moscow and Ankara would deny such a request is not a reason to avoid making it. The job of the State Department is not to spare the Kremlin and Turkey’s autocratic regime embarrassment. Simply put, Secretary of State Antony Blinken should demand full and un-redacted monitoring reports or else declare the Russian and Turkish forces in Agdam as operating in violation of the cease-fire.

Additionally, Russia has not provided any information gathered from its peacekeeping operation in and around Nagorno-Karabakh and along the Armenian-Azerbaijan border. For example, there have been in recent weeks numerous sniping incidents from Azerbaijan-held Shushi (or Shusha as Azeris call it) into Stepanakert, the capital of Artsakh. The Russian peacekeepers have filed no reports on the incidents, nor have they reported on the destruction of Armenian cultural heritage in areas newly returned to Azerbaijani control. In effect, Blinken allows Russian officials to reaffirm the role of the Minsk Group yet refuse to cooperate with it. By refusing to report violations to the Minsk Group, the Russians effectively prevent the implementation of an OSCE investigative mechanism for violations, as was previously agreed.

Blinken should also explain before Congress the evidence that supported his decision to waive Section 907 of the Freedom Support Act and allow military aid to Azerbaijan to continue. This year’s waiver comes despite Azerbaijan’s embrace of Al Qaeda-linked Syrian mercenaries and Azerbaijani dictator Ilham Aliyev’s renunciation of further diplomacy to resolve outstanding issues, both direct violations of provisions necessary for the waiver. Blinken’s cynicism is more destructive and immoral than it is sophisticated but the problem is not partisan. Congress should also investigate the 2020 waiver issued by then-Deputy Secretary of State Stephen Biegun for the simple reason that the subsequent Azerbaijani military operation contradicted his certification of the fact that Baku remained committed to diplomacy. Neither Congress nor the U.S. intelligence community has yet to explain whether the U.S. government knew the September 27 surprise attack was coming and did nothing, or whether the 2020 Nagorno-Karabakh War represented an intelligence failure.

Successful diplomacy deals with the world as it is rather than papers over the problems. As a candidate for president, Joe Biden castigated Trump—with reason—for being too soft on Russia and Turkey. It is ironic, then, that his administration now refuses to hold both countries accountable for their operations in the South Caucasus.