Rebuilding the State Department from the Ground Up 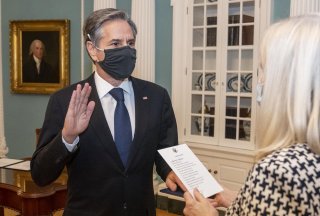 It’s always a challenge for those who lead a great power like the United States to see the big picture. At the same time, they require access to in-depth, granular knowledge of every country in the world. It is a matter of looking up-and-out and at the same time down-and-in.

The down-and-in sort of knowledge is often taken for granted because in the digital age of social media there is the illusion of knowledge in far-flung places where little actually exists. Many people assume they know what is going on, for example, in Ethiopia’s war-torn Tigre province, or in the disputed territory of Nagorno-Karabakh in the Caucasus, just because they can read the episodic dispatches and the posts on Twitter from those places. But most people actually have little idea. And yet, someone like a high policymaker must always be aware of the ground-level reality in every place. That is, he or she must be all-knowing. As I painfully saw in the Iraq War, the most catastrophic decisions at the top can be avoided if only those in power had access to what the lowliest freelance journalist knows about a distant place from firsthand experience.

Obviously, policymakers can’t know the whole world from their own firsthand experience. But they can know it through the experience of others: through foreign service officers stationed at U.S. embassies around the world. For the State Department doesn’t only conduct diplomacy. It also has a vital reporting function, similar to the great newspapers of the print-and-typewriter age with their vast cadre of foreign correspondents. To be successful in the foreign service is an art form akin to being a good and prolific cable writer. That has traditionally meant being a good reporter in the back-of-beyond, away from the embassy in the capital city. The golden age of the State Department, before email tethered diplomats to their desks, was in significant measure about first and second secretaries getting away from their desks and reporting in a manner not dissimilar to how journalists report on things.

Rebuilding the State Department is not only a matter of repairing the devastation of the Trump era with its politicization of everything at Foggy Bottom. It doesn’t only mean reducing the number of political appointees as ambassadors and replacing them with career diplomats, or even raising the department’s budget. It also means re-emphasizing the reporting function of the foreign service, and thereby underlining the development of area expertise. The Cold War-era Arabists and China hands might have gotten certain things wrong, but they represented the foreign service at its best: merging linguistic and cultural knowledge that made them indispensable to policymakers.

Good policy rests on understanding the material at hand in distant places: all the nuances and distinctions that, for example, separate one Baathist head of state in Syria from another in Iraq; that separate one Cold War-era proxy insurgency in Angola from another nearby in Mozambique; that separate the ideological evolution of Turkey’s current ruling Islamists from the generation of Turkish Islamists which preceded them. Henry Kissinger once told me that while he was the one to make the policy decisions, he could not have executed his diplomatic agreements in the Middle East without the advice and granular knowledge of the Arabists.

I concentrate on the Cold War because it was an era when political differences within the State Department were muted compared to today when realists worked well with neoconservatives, and vice versa. It was an era when realism and human rights were not enemies, as humanitarian considerations fit more easily into calculations of national interest because the Cold War was a contest over which system of political values—the United States’ or the Soviets—was best. This ability to synthesize opposing positions constitutes an intellectual virtue that should not be lost.

Alas, the bane of Washington today has often been the tendency to see the world in opposing, unreconcilable archetypes: democracies and dictatorships, moderates and radicals, friendly states and enemy states. But it is the job of the foreign service to break down those formulaic categories and to depict a world of subtle shades: in which progress can be made even with adversaries because some dictatorships are enlightened and some democracies illiberal. The foreign service through its field reporting is the networker par excellence for the U.S. government. It creates opportunities where none have thought to have existed.

Having studied the foreign service for several years in the course of writing a biography of a State Department humanitarian, I can attest that what makes a good foreign service officer is sometimes not that much different from what makes a good newspaper correspondent: a willingness to escape from the embassy and explore beyond the capital city; to explore alone so as not to be influenced by groupthink; to listen for hours to people in the field without asking leading questions; to employ anxious foresight, that is to know the worst about a place so as to warn policymakers about avoidable bad outcomes; and most of all to avoid letting the perfect be the enemy of the good since policymaking is often a world of tough choices. In other words, it takes a highly unusual individual to become a successful foreign service officer. And that is the way it always should be. If we compromise on innate talent, the quality of the foreign service will suffer, no matter how much money is thrown at it.

America’s standing in the world can now be improved in quite a number of ways from the top down. The government can be made to work. The State Department can be renewed. But this transition should begin from the ground up; it should start with the human element.

Robert D. Kaplan is the author of The Good American: The Epic Life of Bob Gersony, the U. S. Government’s Greatest Humanitarian. He holds the Robert Strausz-Hupé Chair in Geopolitics at the Foreign Policy Research Institute.