Balancing Great Power Politics in 2021 and Beyond 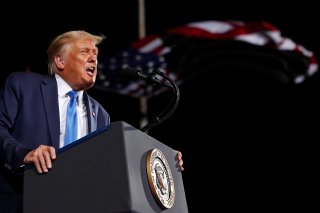 FROM GEORGE Washington through Ronald Reagan and beyond, America’s leaders have generally understood that one key to success in dealing with foreign adversaries is to operate from positions of strength, not weakness. This remains true today. President Donald Trump regularly touts the importance of strength in navigating through the world’s many dangers. His National Security Strategy reflects this belief: “Experience suggests that the willingness of rivals to abandon or forgo aggression depends on their perception of U.S. strength and the vitality of our alliances.” Democratic presidential candidate Joe Biden largely agrees. His foreign policy positions call for the United States to organize and lead the world’s democracies to “confront the rise of populists, nationalists, and demagogues” and counter “the growing strength of autocratic powers” by employing America’s formidable economic might and diplomatic savvy underpinned by “the strongest military in the world.”

Both Republican and Democratic leaders also concur that the world has entered an extended period of great power competition, with a rising China and a revanchist Russia standing out as our primary competitors. Admittedly, the two parties differ somewhat over the optimum mix of tools for marshalling our national strength to compete with rivals. Trump-backers are more likely to stress reliance on a strong military and more willing to adopt unilateral measures, while Democrats tend to talk more about reinvigorating diplomacy and employing collective forms of action. Both parties understand, however, that the era of unchallenged American global hegemony is over.

So far, so good. But there also appears to be a consensus among foreign policy experts in both political camps that, despite a growing recognition of the need to extract the country from a set of “endless wars” in peripheral regions, the United States must go on the offensive against our chief foreign competitors. Biden complains that Western democracies have for too long been on the defensive against Russian aggression, and he advocates pushing back resolutely. A campaign spokesperson vows that the Biden team will “confront Russian aggression from a position of strength, even as we work to maintain strategic stability.” A group of House Republicans and one of the Obama administration’s point persons for Russia policy have each called for “rollback” of Russian aggression, echoing a concept from the John Foster Dulles era that had limited purchase even during the brief period when the United States was the world’s sole thermonuclear power. The Trump administration has pursued a policy of dual confrontation against Moscow and Beijing, touting a set of unprecedentedly tough sanctions and military measures while evincing little concern that the approach is accelerating Sino-Russian cooperation against American interests. Like Trump, Democrats acknowledge that the U.S. strategy of integrating China into the international system has failed to turn Beijing into a responsible stakeholder, and say that Washington must take a harder line against Beijing, even as they demand strong pushback against Moscow. They argue that Russian aggression and Chinese malfeasance have to a significant degree been a function of America’s misguided permissiveness—an indulgence that can be revoked.

There is more than a whiff of political theater in the foreign policy positions on offer during election seasons. Trumpeting the country’s strength has far more popular appeal than bemoaning America’s limitations. Behind the grandstanding, however, lies what appears to be a genuinely believed but seldom stated assumption, which is that projecting American power during the next presidency will largely be a function of mustering the personnel and political will to do so. Trump supporters attribute many of his first-term foreign policy troubles to resistance within the so-called “Deep State,” which they believe has been prioritizing its own interests over those of the American electorate. They anticipate he will enter a second term better able to tame the permanent bureaucracy and advance his agenda, as he and his aides grow more adept at appointing like-minded officials. Biden supporters source many of our recent stumbles to the ineptitude of Team Trump, and believe a Democratic victory will bring the “return of competence and follow-through” in American foreign policy flowing from renewed harmony between White House appointees and the permanent national security apparatus.

It is not unusual for there to be a gap between declaratory foreign policy ambitions and what can be actually be achieved in practice. But in this case, the distance between our aspirations for dealing with our great power rivals and our capacity for reaching our goals looks more like a chasm. The assumption that either a revitalized Trump or a newly-empowered Biden can go on the offensive against both Russia and China is likely to collide head-on with a discomfiting reality: America is currently in no condition to do so successfully, and will not be for some time to come. The chief challenge looming before our next team of foreign policy officials is not how to employ U.S. power to bend China and Russia to our will. It is to gain a breathing spell abroad that will allow the country to focus on desperately needed internal healing. And the more we pursue a two-front offensive against our great power rivals overseas, the more likely we are to compound our domestic problems.

THERE ARE numerous reasons for this state of affairs, many of which are obscured by the fact that the United States still boasts the world’s most powerful military and largest economy. For one thing, the size of the U.S. national debt will soon exceed our entire gross domestic product—the first time this has happened since we went deeply into debt to finance World War II. Decades of relying on credit to pay for military operations in Afghanistan, Iraq, and beyond, coupled with massive stimulus spending to cushion the blows of the 2008 financial crisis and coronavirus shutdowns, are rapidly catching up with us. This will produce great downward pressure on defense budgets and leave us poorly positioned to spend Russia and China “into oblivion” in a new strategic arms race, as Trump officials have threatened.

But national strength is much more than a military or economic phenomenon. It is also rooted in such intangible factors as societal cohesion, dynamism, and self-confidence. Not long ago, our country had these qualities in abundance, and they played a large role in our successes dealing with the Soviet challenge. Their absence today is obvious to all, including to both friends and rivals abroad. They cannot be conjured up on short notice.

This absence has real implications for the country’s ability to devise and implement a coherent foreign policy. It renders Washington more prone to lash out imprudently at foreign adversaries and more likely to view fellow citizens who disagree over policy as enemies to be defeated. The open warfare between the White House, the permanent foreign affairs bureaucracy, and their allies in the mass media has not merely been a function of the Trump team’s inexperience, misadministration, and sharp elbows. It is also a reflection of a growing disconnect between our nation’s elite (which includes the highly-educated experts that man the national security apparatus) and middle America that long predated—and ultimately produced—Trump’s presidency. That disconnect derives from a host of complex causes and is highly unlikely to be bridged by either Trump or Biden in the next four years.

As a result, should Trump win and manage to avoid a nasty and violent post-election dispute, the permanent bureaucracy will not magically abandon its opposition to him and his “America First” approach. It will at a minimum continue to hamstring his initiatives through feigned compliance and other obstructionism, if not open revolt. Trump’s own mistrust of these government experts will interfere with his ability to make sound decisions based on a well-informed understanding of foreign developments and wide-ranging debate of alternative policies.

Should Biden win, tensions between the White House, bureaucracy, and media will certainly subside, but the locus of our political battles will very likely shift from inside the Beltway to outside, as those Americans who have felt abandoned and betrayed by global trade policies, porous borders, and international crusades of the post-Cold War period voice their grievances. Even inside government, resistance in the military and national security establishment to mandatory training seminars based on critical race theory is mounting. Such divisions and dissension will almost certainly hamper whoever leads our next administration, undermining its ability to produce foreign and security policies rooted in strong domestic support.

These internal American divisions also have important implications for how Russia and China might react to excessive U.S. military, economic, and diplomatic pressure. Neither country would be likely to counter perceived threatening U.S. measures through symmetrical attacks on our strengths. Rather, they would almost certainly target our weaknesses, and none loom larger than our internal divisions. Russia’s social media trolling and “hack and leak” operation in 2016 pale in comparison to the kinds of damage Russia or China could inflict with highly sophisticated “deep fake” video disinformation. Social media content rarely changes people’s opinions and beliefs, but it has proved quite capable of enraging target audiences already predisposed to rage. The combination of societal polarization, large numbers of post-coronavirus unemployed, months if not years of pent-up frustrations, and nearly undetectable fake viral video content could produce a highly-combustible United States.