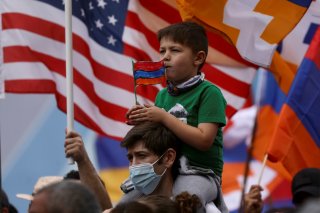 President Joe Biden’s decision on April 24, 2021, to recognize the murder and expulsion of up to 1.5 million Armenians from Turkey as “genocide” was welcome and overdue. However, Secretary of State Antony Blinken gave a gift to Turkey’s brethren in Azerbaijan forty-eight hours later, issuing a national security waiver to Section 907 of the Freedom Support Act. Section 907 bans direct U.S. aid to the Azerbaijani government because of its aggression against Armenians.

Biden and Blinken should have known better; appeasement does not work.

Turkey and Azerbaijan have once again launched an unprovoked attack against Armenia. The New York Times noted, “For the first time in 30 years of a largely frozen conflict over the disputed territory of Nagorno-Karabakh and surrounding districts, Azerbaijan attacked Armenian air defense and artillery systems based inside Armenia.” Heavy fire was reported inside Armenia, targeting civilian homes and infrastructure, despite Turkish and Azerbaijani denials and attempts to shift blame.

This kind of behavior is not new for Turkey’s President Tayyip Erdogan, who has launched cross-border operations to establish a zone of Turkish influence in former Ottoman territories. Erdogan has pursued a neo-Ottoman agenda by targeting Kurds in Syria and Iraq, deploying troops to Libya and the eastern Mediterranean, and using Azerbaijan as a proxy for the ethnic cleansing of Armenians in Nagorno-Karabakh.

The United States has reacted by suspending Turkey from the F-35 stealth fighter program. However, Washington did not implement the sanctions required through the Countering American Adversaries Through Sanctions Act (CATSA), a 2017 U.S. federal law that overwhelmingly passed the Senate 98-2 and the House 419-3. Instead of suspending its purchase of S-400 missiles from Russia, Turkey doubled down and bought more missiles from Moscow.

Additionally, Turkey broke with NATO by refusing to impose sanctions on Russia for its aggression against Ukraine. Turkey helps Russian oligarchs avoid U.S. and EU sanctions. The Biden administration turns a blind eye to Turkey’s domestic human rights abuses and warmongering, hoping that Turkey can play a constructive mediation role.

Azerbaijan is a Turkic country that treats Turkey, its “big brother,” with fealty. In 2020, Azerbaijan attacked Nagorno-Karabakh (“Artsakh” in Armenian) and committed crimes—including mistreating prisoners of war in ways that violate the Geneva Conventions—and cultural genocide, targeting Armenian Orthodox churches and religious icons.

The international community subcontracted peace operations to Russia and, in so doing, undermined prospects for peace itself. America’s laisser-faire approach also undermines the Minsk Group of the Organization for Security and Cooperation in Europe, which is tasked with mediating the conflict. The recent appointment of Philip Reeker, a seasoned diplomat, as U.S. co-chair of the Minsk Group, is a good move that could revitalize international mediation.

In fact, the United States has rewarded Azerbaijan’s aggression. The West has turned to Azerbaijan, Venezuela, and Iran to fill the gap in energy supplies from Russia’s decision to shut down the Nordstream II pipeline. Ukraine is Biden’s top priority, trumping other concerns including human rights.

Azerbaijan must pay a price for attacking a sovereign state in violation of international law. The Biden administration can get Aliyev’s attention by rescinding its waiver of Section 907.

Bipartisan legislation introduced by Congressman Adam Schiff (D-CA) and the Congressional Caucus on Armenian Issues condemns Azerbaijan’s unprovoked attacks on Armenia and Nagorno-Karabakh and calls for an “immediate and unconditional ceasefire.” It also requires ending all assistance to Azerbaijan whose aggression is an attempt to eliminate the centuries-old Christian presence of Armenians in the Caucasus. Speaker Nancy Pelosi (D-CA) will travel to Armenia this weekend to show support.

Objective observers of the region are bewildered by the Biden administration’s mixed messages on Turkey and Azerbaijan.  No doubt Armenian Americans will vent their displeasure during the midterm elections unless Biden takes meaningful steps in reacting to Azerbaijan’s aggression.

A robust response starts with rescinding the waiver of Section 907 and significantly increasing U.S. aid and presence in Armenia and Nagorno-Karabakh to protect democratic Armenia. Similar to defending Ukraine, Washington should take steps to prevent Turkic aggression against a sovereign state and strategic partner.

David L. Phillips is Director of the Program on Peacebuilding and Human Rights at Columbia University’s Institute for the Study of Human Rights. He served as a Senior Adviser and Foreign Affairs Expert during the Clinton, Bush, and Obama administrations.