Is it Too Late to Prevent a Nuclear Doomsday? 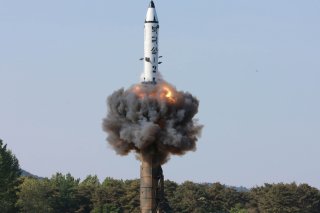 The Doomsday Clock was created by the Bulletin of Atomic Scientists in 1947 to demonstrate in stark terms just how close humanity was to collective nuclear suicide. During the Cold War, it wobbled between two minutes and fourteen minutes to midnight. The clock came to be a respected bellwether measuring nuclear tensions and helped to generate interest and drive action to advance nuclear non-proliferation. After the collapse of the Soviet Union in 1992, the “end of history” registered at seventeen minutes to midnight.

Today, thirty years later, it is just 100 seconds to midnight—its closest point ever.

But if the current generation is concerned, it has a peculiar way of showing it. Today, we seem unfazed by the prospect of nuclear annihilation. Such anxieties just aren’t part of our zeitgeist.

In a recent Red Cross survey asking participants to rank twelve global threats, nuclear attacks ranked at the bottom. Unlike during the Cold War, which was dominated by two clear ideological adversaries, our current multipolar system lacks the rigidity that affixed nuclear war to the public consciousness. Instead, the fluid nature of the contemporary international order is plagued by a range of transnational challenges—from terrorism to climate change—that vie for the public’s attention.

On August 29, the International Day Against Nuclear Tests passed with tragically little notice except the inherent irony of Russia marking the occasion by blocking a UN resolution calling for a global nuclear non-proliferation treaty. The UN resolution would have criticized Russia for its actions at the Chernobyl and Zaporizhzhia nuclear power plants in Ukraine.

The cynicism that drove Russia to block the non-proliferation treaty’s final document approval demonstrates the challenges nuclear non-proliferation faces. Nuclear weapons are no longer just a great power deterrent that enforces the doctrine of mutually assured destruction. Nuclear proliferation is now principally a means of flaunting the rules-based international order wherein the possession of a nuclear weapon is the ultimate guarantee of regime security, and the ability to hand them out to non-state actors remains a dangerous possibility.

There are clear illustrations of nuclear proliferation’s odious impacts.

India and Pakistan’s intermittent border skirmishes in Kashmir constitute an existential threat to humanity, as Islamabad adheres to first use doctrine.

Pyongyang’s possession of a nuclear deterrent gives the Kim crime family license to run its hermit kingdom, threaten regional security, and extort foreign aid by keeping its own citizens hostage.

And should Tehran’s mullahs achieve nuclear breakout, they could threaten the world’s oil supplies in the Persian Gulf. The Islamic Republic’s support of hostile non-state actors in the Middle East—from Hezbollah in Lebanon and Iraq to the Houthis in Yemen—would undoubtedly set off a nuclear arms race with Israel and Saudi Arabia.

Thankfully, there are successful models of nuclear disarmament. Kazakhstan, the initiator of the August 29 Day Against Nuclear Tests, stands as the single most successful instance of nuclear disarmament. Inheriting nuclear missiles after the fall of the Soviet Union, Kazakhstan ended up with the world’s fourth largest nuclear arsenal. In subsequent years, Kazakhstan dismantled or repatriated to Russia over 100 intercontinental ballistic missiles and over 1,000 nuclear warheads, secured support to clean up the many sites contaminated by Soviet nuclear tests, implemented a sustainable nuclear-energy policy, monitored uranium at the source to ensure compliance with all treaties, and became an international leader in nuclear non-proliferation.

The Kazakh model for nuclear disarmament was a successful political project.The Kazakh people have pushed for denuclearization and an end to testing since it was part of the Soviet Union. A multi-vector foreign policy that synchronized foreign policy with international consensus resulted in significant progress toward an integrated market economy governed by the rule of law. This process culminated with the 2018 Kazakh pledge to proactively move towards a nuclear-weapon-free world. This strategy, led by the current president, Kassym-Zhomart Tokayev, was also effective in providing Kazakhstan with a reliable set of international partners and a great deal of soft power. The country has attracted over $170 billion of foreign investment.

The Kazakh model of denuclearization should be commemorated on the Day Against Nuclear Tests and exported worldwide. As the world grapples with the war in Ukraine and the renewed nuclear race, Kazakhstan’s nuclear disarmament has already inspired suggested denuclearization strategies for North Korea. Kazakhstan has also cooperated with Japan to lead international disarmament efforts and nuclear-testing contamination cleanup. Kazakhstan’s uranium control experience could even be vital to uranium-rich countries like Niger and Namibia, which are set to increase uranium production as the world considers a nuclear power renaissance, without sacrificing its peaceful nuclear energy development plans.

Humanity can fail many times in many arenas and gain wisdom from its experiences in all things, except nuclear war. If we unleash nuclear weapons, there will be no lessons learned—only an unmitigated disaster. Learning from Kazakhstan, the world can do better.