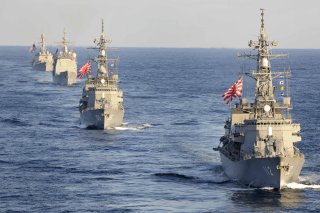 During a meeting at the Pentagon with U.S. defense secretary Lloyd Austin, Japanese minister of defense Yasukazu Hamada registered concern about cooperation between Russia and China, as well as growing threats to stability in the Pacific region.

“We have seen various events that are of concern for the Japan-U.S. alliance, one after another, including Russia’s aggression against Ukraine, the landing of China’s ballistic missiles near waters of Japan, and China and Russia’s joint exercise around Japan,” Hamada said.

It is not surprising that Japan is increasing its military budget, expanding the size and scope of its defense forces, and recalibrating its strategic outlook. Japanese leaders continue to try and expand the interpretation of “defensive” enshrined in Japan’s constitution to increase flexibility when it comes to the use of military force. Such initiatives make sense given the current global environment and growing threats to Japan in its region.

“We can never condone unilateral attempts to change the status quo in any parts of the world. At the same time, the aggression against Ukraine shows us the paramount importance of the will and capabilities to defend one’s own country,” Hamada said. “In order to clearly demonstrate our will and capability, I would realize fundamental reinforcement of our defense capabilities, reformulation of strategic documents, examining all options, including the so-called strike -- counter-strike capabilities. We would also work to secure a substantial increase of the defense budget needed to effect it.”

Hamada’s comments are reinforced by Japan’s 2022 Defense of Japan report which details a large-scale budget increase as well as expanded security cooperation with the United States.

There is already substantial technological collaboration between the United States and Japan in areas such as weapons development, including Japan’s use of ship-based Aegis radar for ballistic and cruise missile defense, the SM-3 IIA interceptor, and the F-35 stealth fighter.

Not only will Japanese warships operate with sensitive long-range Aegis radar systems, but the 2022 Defense of Japan report explained that Japanese destroyers have been able to successfully launch F-35Bs.

An ability to launch vertical-take-off and landing F-35Bs from destroyers will give Japan a distinct maritime advantage. China does operate a limited number of land-based fifth-generation J-20 aircraft but does not yet have sea-launched fifth-generation aircraft. China’s emerging J-31 fighter is being designed to take off from a carrier runway but cannot perform vertical-take-off-and-landings.