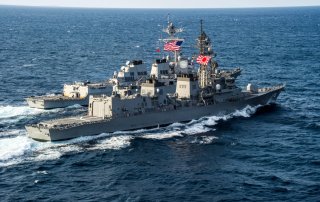 The Japanese military is acquiring more F-35 stealth fighters, guided missiles, drones, and warship weapons systems to counter a massive Chinese military build-up, as well as a growing desire to increase training and interoperability with the United States.

There is an interesting provision within Japan’s military budget that allows for more funds to be allocated to the “realignment of US forces” in Japan. This is significant given the record of successful weapons development collaboration between the United States and Japan for many years. For example, Japan is one of a number of U.S. allies operating Aegis Combat Systems on their warships. Not only does this greatly expand allied interoperability, but the integrated software, radar, fire control, and missile system expands the range and capabilities for ballistic missile defense and air-and-cruise-missile defense at sea. This will be critical in the Pacific theater as Tokyo seeks to defend its shores from Chinese ballistic missile attacks, many of which could reach Japan from mainland China.

“In order to secure technological superiority, Japan has decided to significantly increase investment in potentially game-changing technologies, and has increased R&D expenditure to a record high,” the report said.

In recent years, Japan has also collaborated with the United States in the development of several cutting-edge weapons such as the SM-3 Block IIA interceptor missile. Engineered as an upgraded variant of the SM-3 missile, the SM-3 Block IIA weapon is larger with greater range and capabilities than its predecessors. The SM-3 Block IIA could potentially integrate intercontinental ballistic missile defenses at sea with expanded intercept range and precision-guidance technology.