Jerusalem Declaration: U.S. Will Use ‘All Elements’ of Power to Prevent Iranian Bomb 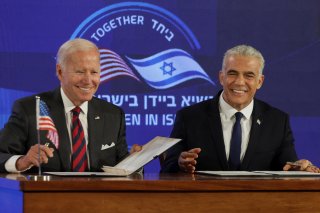 President Joe Biden is visiting Israel this week for the first time as president, and the trip appears to have yielded some diplomatic fruit.

Biden and Israeli prime minister Yair Lapid announced that they signed a document known as the “Jerusalem Declaration on the U.S.-Israel Strategic Partnership."

“The United States and Israel reaffirm the unbreakable bonds between our two countries and the enduring commitment of the United States to Israel’s security,” the agreement says. “Our countries further reaffirm that the strategic U.S.-Israel partnership is based on a bedrock of shared values, shared interests, and true friendship. Furthermore, the United States and Israel affirm that among the values the countries share is an unwavering commitment to democracy, the rule of law, and the calling of ‘Tikkun Olam,’ repairing the world,” it continues.

The agreement also included a section about Iran and its nuclear ambitions.

“The United States stresses that integral to this pledge is the commitment never to allow Iran to acquire a nuclear weapon, and that it is prepared to use all elements of its national power to ensure that outcome. The United States further affirms the commitment to work together with other partners to confront Iran’s aggression and destabilizing activities, whether advanced directly or through proxies and terrorist organizations such as Hezbollah, Hamas, and Palestinian Islamic Jihad.”

In 2015, during the Obama administration, the United States and several coalition partners reached an agreement with Iran to curb that country’s nuclear program. The deal was reached over Israel’s strenuous objections, and the Trump administration exited the agreement in 2017. Talks are ongoing to revive the agreement.

The declaration also says Israel and the United States will “continue to work together to combat all efforts to boycott or de-legitimize Israel.”

The Jerusalem Declaration also “reaffirms [Biden’s] longstanding and consistent support of a two-state solution and for advancing toward a reality in which Israelis and Palestinians alike can enjoy equal measures of security, freedom and prosperity.”

The visit appears to have gone smoother than one of Biden’s visits to Israel during his time as vice president. In March of 2010, while Biden was in Israel, then-Prime Minister Benjamin Netanyahu announced 1,600 new housing units in East Jerusalem at a time when the Obama administration was pressuring Israel to allow fewer settlements.

Biden condemned the move at the time as “precisely the kind of step that undermines the trust we need right now.”