Joint Force: Marines Enhance Interoperability With the Navy and NATO 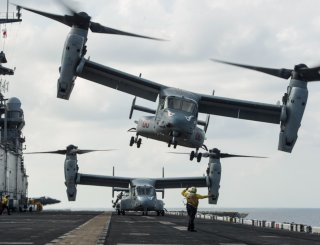 During a recent composite training unit exercise, the 26th Marine Expeditionary Unit had the chance to work with allies and the U.S. Navy and improve interoperability.

The goal of the COMPTUEX exercise, a U.S. Navy statement explained, was to more closely integrate with the Carrier Strike Group “as a cohesive, multi-mission fighting force” that tests the “ability to carry out sustained combat operations from the sea.” The training opportunity allowed sailors and marines to team up “in response to specific scenarios across all warfare areas,” as well as to “refine their ability to communicate and fight alongside one another in a realistic training environment that included academic, synthetic and live training events.”

During the exercise, a Marine Expeditionary Unit integrated with COMPTUEX for the first time.

“This is the first time that a marine expeditionary unit has integrated into a carrier strike group’s COMPTUEX,” said Col. Dennis Sampson, the commanding officer of the 26th Marine Expeditionary Unit, in a U.S. Navy release.

“This COMPTUEX allowed the 26th MEU to partner with Expeditionary Strike Group 2 as a higher echelon command mirroring a marine expeditionary brigade or the current Task Force 61/2 construct. Exercises like COMPTUEX provide the 26th MEU with a unique opportunity to enhance our core staff competencies across warfighting domains, contributing to the success of the naval expeditionary force within the construct of this exercise,” Colonel Sampson explained.

“Moreover, as we prepare to deploy with the Bataan Amphibious Ready Group, these realistic naval exercises provide opportunities for naval integration and opportunities to strengthen relationships across the amphibious ready group/marine expeditionary unit, while showcasing the relevance and operational capability the ARG/MEU provides to a fleet commander.”

With the flames of war still alight in Europe and Sweden and Finland poised to join NATO, the alliance’s importance has reached heights not seen since the end of the Cold War.

During the COMPTUEX exercise, the strike group also worked in tandem with a NATO vignette. The NATO vignette is “a period of time during which a NATO command exercises command and control of exercise participants,” the U.S. Navy explained.

“The GHWBCSG team rehearsed a transfer of authority (TOA) of command and control between U.S. 2nd Fleet and Naval Striking and Support Forces NATO (STRIKFORNATO), NATO’s rapidly deployable joint headquarters in Portugal. The strike group used NATO reporting procedures, messaging formats and chat capabilities, reinforcing command and control and aligning communications channels to ensure a seamless process in the event of a crisis. NATO vignettes also support the development of interoperability requirements for future force generation and improve allied maritime command and control linkages that are vital in all phases of warfare.”