Cyber Yankee: The Marine Corps Is Laser Focused On Cyberwar 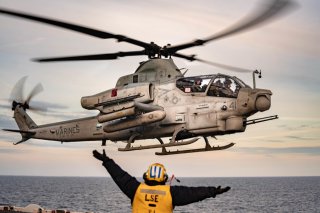 During a conflict with the United States, an opponent could try to disrupt power and water supplies by knocking regional power supplies off-line or cutting off access to running water. In response to this challenge, the Marine Corps is working with National Guard units to prepare for this challenge.

The cyberwarfare exercise, called Cyber Yankee, is “a joint effort between the national guards of the New England states,” the Marine Corps explained in a statement.

“They try to build up their capabilities and respond to any attacks to the critical infrastructure in New England while building a partnership between the National Guard, industry partners and the other branches of the United States military,” said L Cpl. Miles Young, a data systems administrator for Defensive Cyberspace Operations-Internal Defensive Measures Company B, 6th Communication Battalion.

“The Marine Corps’ role in this is to simulate an attacker so that the defense can clearly evaluate how they are doing,” Young added.

During Cyber Yankee, the participants were divided into red and blue teams, with the Marines acting as an attacking force and the blue team defending.

“They vary in levels of sophistication from a cyber-criminal or hacktivist that is doing nothing more than low risk access attempts that can be mitigated by very simple security controls and elevate all the way up to the most advanced threat act or using sophisticated means of initiating access with stealthy movement throughout the IT enclave and into the operational technology enclave where the critical infrastructure is located,” McAllister continued.

“Marines participate in regional exercises and provide red team capabilities to the Joint Force Reserve, National Guards, and industry professionals [as they] interface for regional utilities which means we’re going in and helping the blue teams refine their play books so if they are called to support utility companies or in disasters of cyber nature,” said S Sgt. Sean Sarich, an innovation laboratory specialist with the Marine Innovation Unit.

Together, Cyber Yankee 2022 and MCDP 8 shine the spotlight on the Marine Corps’ focus on the next war—and the outsized role the information and cyber domains will play. And, as always, the United States’ force-in-readiness is preparing to fight—and to win.