Just How Capable Is the Ukrainian Military? 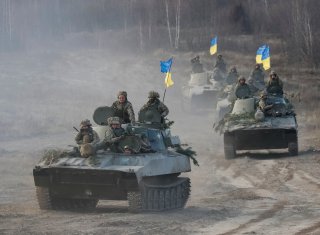 A report recently prepared by the Congressional Research Service (CRS), the public policy research institute that reports to Congress, shed some light on the current state of the Ukrainian military.

The beleaguered Eastern European democracy located on Russia’s doorstep is in immediate danger of invasion, with over 100,000 Russian soldiers massing on Ukraine’s borders with Belarus and Russia.

Russia’s 2014 annexation of Crimea and invasion of Ukraine’s eastern Donbas region prompted significant change in the Ukrainian military. While Ukraine carried out broad modernization and structural reforms, the navy lost approximately 70 percent of its ships, and many sailors and officers defected.

In light of Ukraine’s significantly weakened navy, as well as Russia’s advances in anti-ship missile technology, the Ukrainian Navy restructured its force into a “mosquito fleet.” Ukraine focused on acquiring smaller, faster vessels instead of attempting to reconstitute its previous force.

With approximately 150,000 troops in uniform, the army is by far Ukraine’s strongest military branch. Recognizing the threat posed by Russia, Ukraine has added over 140,000 soldiers to its army since 2014. Still, the Ukrainian Army relies heavily on upgraded Soviet equipment and is in serious need of more modern hardware.

Another shortcoming of the Ukrainian Army is its mixed professional-conscript force. Poor salaries and inadequate benefits and living conditions have resulted in low officer retention.

Like the army, the Ukrainian Air Force is heavily reliant on Soviet legacy equipment that is often over thirty years old. The force is additionally hampered by the fact that it lost many aircraft in 2014. While much of the Ukrainian Air Force’s equipment is outdated, modern Turkish-made Bayraktar TB2 drones recently made their combat debut in eastern Ukraine.

The most capable part of the Ukrainian military? Their air assault and special operations forces. Initially lightly armed, the Ukrainian Air Assault Forces were revamped and rearmed thanks to assistance from the United States and NATO.

Ukraine’s Air Assault Forces “played a key role combatting Russia’s invasion of eastern Ukraine,” the CRS report explains. “Considered elite troops, air assault units originally were light infantry under the army’s command. Out of necessity and experience, [they] increased in size and transitioned into an independent command with heavier equipment.”

The CRS explains that while they may be small, Ukraine’s special operations forces have experienced the most significant improvement since 2014. Notably, Ukraine’s 140th Special Operations Forces Center successfully passed NATO certification in 2019, which allows the force to deploy as part of the NATO Response Force.