Just a Test? This Year's RIMPAC Naval Exercise Ended With a Bang 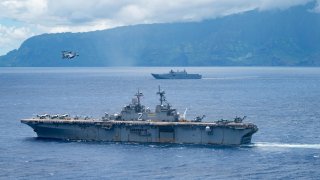 America’s ability to operate with partners and allies is a force multiplier.

The United States Navy’s biennial Rim of the Pacific exercise is the world’s largest maritime military exercise and has occurred every two years since the 1970s.

This year’s iteration saw twenty-six countries participate in various ways and, like many previous RIMPACs, ended with a bang—live-fire target practice against a decommissioned U.S. Navy vessel.

Though RIMPAC, as it is commonly known, is led by the United States Navy, the strength of the multinational maritime exercise is the multitude of Pacific or Pacific-interested nations that RIMPAC attracts.

“We’re going to have to someday plugin as one unit, and whether that’s in a humanitarian assistance or disaster response or if it’s in a high-end fight, we need to be able to come together because no one of us is strong enough to tackle any of those problems, whether it’s HADR or a high-end fight,” Vice Adm. Michael Boyle, the commander of U.S. 3rd Fleet, told USNI News.

Working with partner nations and allies—and ensuring that those countries can efficiently operate alongside American forces–is of utmost importance. But, rather than simply interoperability, the United States would like to achieve an even tighter degree of closeness: interchangeability.

“I tell people that for interchangeability, [it’s] kind of the nexus, the intersection of national objective overlap and interoperability, which is the ability to talk to each other and to work together and to communicate and have tactics that are comparable and complementary,” Vice Adm. Boyle explained.

“My argument for interchangeability is that if we try to drive interoperability from the bottom up, from the tactical level up, what always seems to happen in my view … is we run into policy barriers,” Vice Adm. Boyle said.

“What seems to work better from my perspective is if we first figure out where our national objectives overlap, then we drive into that space and we have the weight and the leverage of our national command authority.”

Different Pacific countries are uniquely placed—both geographically and from a capabilities standpoint—and can bring different things to the table, to the advantage of all.

“So if it’s important to the nation, then it’s easier to break down the barriers… for country X because it’s going to enable me to do this thing, which is our national objective. It’s also there’s.’ So it’s win win win. We get interoperability. They take care of their thing. We take care of our thing. And then we drive to the next country or group of countries. You know–multilateral is always better for us – and see where we can find overlapping objectives.”

So while there is a pressing—and indeed warranted—concern about the Indo-Pacific's future security, the United States' strength is its allies and partners, not just what the United States Navy can alone bring to the table.