Kissinger Urges Caution on China, ‘Sense of Direction’ in Europe 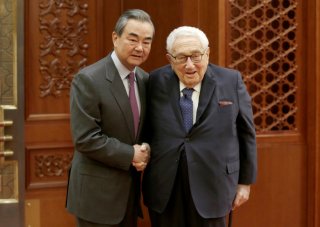 Former U.S. secretary of state Henry Kissinger urged caution and “Nixonian flexibility” for the Biden administration as it manages U.S.-China relations, warning that the relationship would endure for the foreseeable future and pushing the president to view U.S. relations with Beijing outside of the domestic political sphere.

“Biden and previous administrations have been too much influenced by the domestic aspects of the view of China,” Kissinger claimed on Tuesday in an interview with Bloomberg News. “It is, of course, important to prevent Chinese or any other country’s hegemony, [but] that is not something that can be achieved by endless confrontations.”

In recent years, Kissinger—who as secretary of state masterminded former President Richard Nixon’s decision to travel to China in 1972, opening U.S. relations with the communist country—has urged U.S. leaders to maintain a stable relationship with China, describing the increasing hostility between Washington and Beijing as a “catastrophe” for global security comparable in scope to the outbreak of World War I.

Kissinger’s interview was partially intended to promote his new book, Leadership: Six Studies in World Strategy, which examines the lives of Nixon, Margaret Thatcher, Charles de Gaulle, Konrad Adenauer, Anwar Sadat, and Lee Kuan Yew—all six of whom Kissinger interacted with during his tenure in the executive branch. Kissinger claimed that Lee would have been best-equipped to manage global geopolitical tensions from the White House in the twenty-first century, although he acknowledged that de Gaulle would have been a superior negotiator with Russian leader Vladimir Putin.

In his remarks, Kissinger obliquely criticized current European leaders, including French president Emmanuel Macron and German chancellor Olaf Scholz, suggesting that they did not “have the same sense of direction and mission” as their predecessors de Gaulle and Adenauer had.

The former secretary of state also attempted to clarify comments made earlier in the year at the World Economic Forum in which he had appeared to urge Kyiv to surrender territory to Russia in exchange for peace, leading to a firestorm of criticism in the West and a personal rebuke from Ukrainian president Volodymyr Zelensky. Kissinger argued that his words had been misreported, reiterating his view that the best outcome for Ukraine and for long-term stability would be a negotiated settlement to end the war.