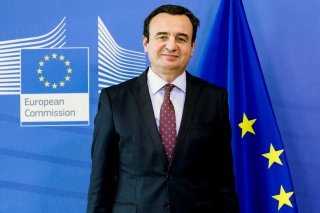 Kosovo’s foreign minister announced during a televised interview on Wednesday that the small Eastern European nation would seek candidate status within the European Union by the end of the year—a step that potentially lays the groundwork for its eventual integration into the body, but one that is unlikely to result in acceptance until a resolution of its ongoing issues with its northern neighbor Serbia.

“We said we would apply this year, and we will apply this year,” Kosovar foreign minister Donika Gervalla-Schwarz told the nations’ KlanKosova television network, reiterating an earlier vow by the country’s government. “We also notified our international partners that our goal is to apply this year, because we want to enjoy EU candidate status.”

In justifying the Kosovar government’s decision, Gervalla-Schwarz observed that more than ninety percent of the country’s population supported membership in the EU and NATO as soon as possible, according to recent polling.

Kosovo’s potential accession to the European Union will inevitably be complicated by its diplomatic conflict with Serbia, which ruled Kosovo as a province throughout most of the twentieth century. Formerly a majority-Albanian region within the overwhelmingly-Serb Serbia, a group of Kosovar rebels declared Kosovo’s independence in 1998, prompting a year-long guerrilla war against the Serbian government of Slobodan Milosevic. After a seventy-eight-day NATO air campaign on the side of the Kosovars, Serbian forces withdrew from Kosovo; the province formally declared its independence in 2008 but remains unrecognized by five EU member states and roughly half of the United Nations, including the organization itself.

Serbia has never acknowledged the country’s independence, regarding it as a rebellious province, and has offered support to ethnic Serbs living within Kosovo—actions that Pristina deems as violations of its sovereignty. The dispute has also complicated Serbia’s bid to enter the EU; Belgrade has enjoyed candidate status for the organization since 2012, but EU officials have emphasized that its normalization of relations with Kosovo would be “a priority and a requirement” for its accession.

In her interview, Gervalla-Schwarz emphasized Kosovo’s democratic credentials, noting that it had been “a leader of democracy in our region.”

“There is no reason for Kosovo to be treated differently from other regional countries, which are nowhere near as democratic,” she observed.

Serbian leader Aleksandar Vucic told the Serbian parliament on Tuesday that the EU had urged Serbia to recognize Kosovo as a precondition for entry into the bloc but vowed that he would not do so while in office.