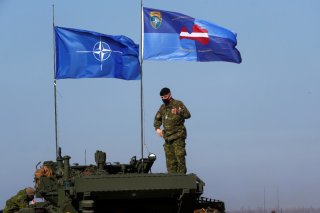 The leaders of Bosnia and Herzegovina and Kosovo, two former Yugoslav republics in the Balkans, each re-emphasized this week that they favored joining NATO in response to Russia’s invasion of Ukraine.

The two leaders’ moves were influenced in part by Russia’s influence in the Balkans, where Moscow retains strong political ties with Serbia. The Serbian government regards Kosovo, a former Serbian province during the Yugoslav era, as a breakaway region rather than an independent country.

Serbia was the central antagonist against both states during the violent and chaotic breakup of Yugoslavia during the early 1990s. Ethnic Serbs within Bosnia seeking a political union with Serbia conducted mass killings of Bosniak Muslims during the Bosnian War, while Kosovo and Serbia fought when the majority-Albanian province attempted to secede from Serbia in 1998. Both Bosnia and Kosovo have made accession to NATO, which guarantees security against invasion through its mutual defense commitment, a major foreign policy goal to prevent similar conflicts in the future.

Apart from Serbia, Bosnia and Kosovo became the only two Balkan states outside of NATO when North Macedonia acceded to the alliance in 2020. The two nations’ accessions are complicated by political factors; Kosovo remains unrecognized by four NATO members, while Bosnia’s internal political situation is highly divided, with a large contingent of pro-Serbian secessionists led by rotating president Milorad Dodik.

Serbia has opposed NATO since the 1990s when the alliance carried out a bombing campaign against Belgrade in 1999 in order to end the Kosovo War. Russia has always opposed further NATO expansion and protested against the Bosnian and Kosovo bids to enter the alliance. Although Russia has no authority to block any country from joining NATO, the Russian Embassy in Sarajevo described Bosnian NATO accession as a “hostile act” in 2021 and warned that Russia would react appropriately. In an interview with Bosnian television in March, Russia’s ambassador to Bosnia, Igor Kalabukhov, warned that the country could experience a military intervention if it proceeded with its bid.

“If [Bosnia] chooses to be a member of anything, that is its internal business,” the ambassador said. “But there is another thing [to consider], our reaction. We have shown what we expect on the example of Ukraine. If there are threats, we will react.”

Kosovo’s president, Vjosa Osmani, highlighted these words as evidence “that Russia has a destructive interest in our region” in an interview with Qatar’s state-run Al Jazeera media network.

“They especially have an interest in attacking Kosovo, Bosnia and Herzegovina, and to some extent also Montenegro,” Osmani said, warning that Moscow would likely act through Serbia.