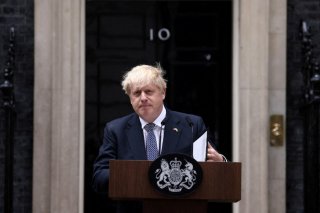 In the hours after British prime minister Boris Johnson announced on Thursday that he would resign as leader of the Conservative Party—a move that cleared the way for the election of a new prime minister—Russian politicians and media commentators expressed satisfaction with the British leader’s fall from power. Many observed that Johnson had worked against Russia’s interests by providing Ukraine with substantial political, military and financial assistance since the onset of Moscow’s invasion of Ukraine in February.

Johnson was initially elected to succeed former prime minister Theresa May and won a decisive electoral victory over Jeremy Corbyn in 2019. The “Partygate” scandal, which revealed that he and other senior government members had thrown private parties during Britain’s COVID-19 lockdowns, contributed to his downfall. Although Johnson initially vowed to continue in his position, the resignation of two cabinet ministers on Wednesday prompted him to follow.

Russian commentators largely avoided discussing the substantive reasons for Johnson’s departure from office, instead gloating that Russia had lost an influential adversary, with Kremlin spokesman Dmitry Peskov observing on Thursday that Johnson “doesn’t like us, [and] we don’t like him, either.”

Other Russians attempted to tie Johnson to bloodshed in the Ukraine conflict. Vyacheslav Volodin, the speaker of Russia’s State Duma, labeled Johnson as “one of the main ideologues of the war against Russia until the last Ukrainian,” warning other European leaders that they could also lose their positions over popular discontent from economic sanctions against Russia.

Oleg Deripaska, a Russian billionaire industrial magnate and a close ally of Russian leader Vladimir Putin, described Johnson’s resignation on his Russian-language Telegram channel as an “inglorious end to a ‘stupid clown,’ whose conscience claims tens of thousands of lives in this senseless conflict in Ukraine.”

Russian foreign ministry spokeswoman Maria Zakharova argued that Johnson’s fall had come about partly due to his challenge against Russia, which had led to negative economic consequences in the West.

“The moral of the story is, do not seek to destroy Russia,” Zakharova wrote on Telegram. “Russia cannot be destroyed. You can break your teeth on it—and then choke on them.”

In his resignation speech, however, Johnson vowed that Britain’s commitments to Ukraine would continue without incident across administrations, claiming that the United Kingdom would “continue to back your fight for freedom for as long as it takes.” Johnson’s successor as prime minister is unlikely to change London’s Ukraine policy, as it enjoys a wide bipartisan consensus within both the Conservative and Labour parties.