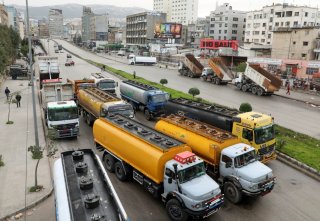 Traffic delays mounted throughout Lebanon on Thursday as striking members of the country’s public transportation union blocked roads with their vehicles to protest the government’s ineffective response to the country’s deepening economic crisis.

Several other labor unions also participated in the strike, leading Lebanon’s remaining businesses to largely halt their operations throughout Thursday. Universities and schools throughout the country were also closed due to road closures, and protests took place on highways and city streets from 5 a.m. until the evening. The drivers’ main demand has been the restoration of fuel subsidies, which the government lifted earlier in the year in order to save money.

Lebanon’s banking sector, once the largest and most sophisticated in the Middle East, failed in 2019. The World Bank described the resulting collapse, in which the Lebanese pound fell from 1,500 per dollar to more than 30,000 per dollar, as one of the worst financial collapses in the world since 1850. Today, four out of five Lebanese citizens live in poverty, and the army’s food is being supplied by a foreign country. The country’s economy shrunk by an estimated 7 percent in 2021, a significant improvement from its loss of 20.2 percent in 2020, per the World Bank.

The devastation of the country’s economy has also been complemented by ongoing fallout from the enormous explosion that leveled downtown Beirut in August 2020. Many citizens are upset that the government has not revealed the cause of the explosion.

In addition to the anger caused by the economic crisis, many Lebanese citizens have expressed frustration that their government’s apparent corruption and mismanagement seem to have remained intact. A new cabinet that committed to fixing the economy in September has not met in three months, and various factions have battled over the investigation into the causes of the port explosion.

The country’s embattled president, Michel Aoun, has pushed for the creation of a cross-sectarian commission to open a national dialogue regarding the country’s economic situation. However, this proposal has failed to attract support in the country’s sharply divided sectarian parliament.

In the West, observers have argued that Lebanon’s failure to implement badly needed reforms is in large part due to a political elite’s reluctance to surrender its power by reforming the country’s political and economic system, even though changes have been demanded by Lebanon’s international creditors.

Human Rights Watch indicated in its world report on Thursday that the “corrupt and incompetent Lebanese authorities” had “deliberately” failed to solve the economic crisis in order to protect their own interests, which the organization argued constituted blatant disregard for the country’s citizens.