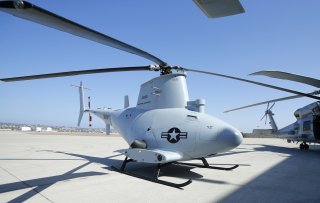 Arming a ship-launched drone with these weapons, with human commanders operating in a command-and-control capacity, introduces new forward attack possibilities in maritime warfare by enabling other ship-launched attack platforms such as MH-60R helicopters to operate at a safer standoff distance. A Fire Scout could, for instance, operate beyond line of sight and, if directed by a human, fire weapons upon enemy shore positions or even small fast-attack boats.

The more than three-thousand pound Fire Scout can fly up to 110 knots at altitudes of twenty thousand feet, to conduct surveillance and reconnaissance missions; the Fire Scout uses shallow-water countermine sensors called COBRA, for Coastal Battlefield Reconnaissance and Analysis.

A key element of the armed Fire Scout would be to maximize networking, as its Northrop Grumman developers have explained that the drone has operated successfully in autonomous operations with other drones and surface ships. It has been part of the Littoral Combat Ship’s anti-submarine, countermine and surface warfare Mission Packages intended to generate an overall combat effect through a combination of helicopters, drones, sensors, weapons and surface-ship technologies.

Land-launched drones such as the MQ-9 Reaper or the Army’s MQ-1C Gray Eagle have been armed for many years, as they can easily be operated from ground-based command-and-control facilities. Performing moving command and control at sea can of course introduce new challenges, yet the Navy is making rapid progress integrating more drones with its surface fleet. The service is even engineering small drone headquarters onboard aircraft carriers to leverage the added mission possibilities afforded by drones. There is also a continued ability for airborne command and control, meaning a manned Navy helicopter could likely operate a forward drone while sustaining connectivity with a host ship. Army Apache and Kiowa helicopters, for example, can already control the flight path and sensor payload of nearby drones, a technical capacity in development now for many years which brings new tactical dimensions to airborne attack. Using this kind of reconnaissance and targeting at sea could, for instance, integrate Fire Scout unmanned aircraft with surface and even air drones to function as meshed relay “combat” nodes within a larger connected maritime warfare network.