Aircraft Carrier Questions: Why Is It So Hard to Land a Fighter Jet On One? 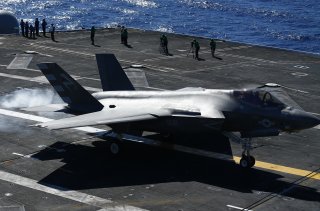 Fighter jets usually bank a hard turn over the ocean to align directly with an aircraft carrier’s deck before descending upon their final “glide slope” landing approach. Landing an aircraft on a carrier is a complex, variable and highly challenging process, particularly in high winds, rough sea conditions or at night, yet it is done routinely with great precision due to pilot training and precision. Pilots follow a light on the carrier deck referred to as the fresnel lens to gain proper alignment as they reduce speed, align the nose of the jet and lower onto the carrier deck. If the lens is properly “centered,” then pilots know they are approaching correctly. If it is out of alignment, they may need to readjust for another pass.

The process is now becoming easier, more efficient and ultimately less risky for pilots on carriers because the Navy’s new Joint Precision Approach and Landing System, or JPALS, has been declared operational. A Navy report describes JPALS as a system that “integrates with shipboard air traffic control and landing system architectures” to facilitate precise landings.

Since 2016, JPALS has been operating effectively on amphibious assault ships with the F-35B and is now providing the same “all-weather, precision-navigation approach” for the F-35C on aircraft carriers.

The dangerous and high-risk process of landing jets on carriers at sea goes back many years. It has been massively improved in more recent years in other respects as well through the advent of a series of innovations to include night-vision technology, improved navigational avionics and, in the case of the F-35 fighter jet, a software program called Delta Flight Path. This system brings computer automation to the landing process in order to greatly assist pilots as they try to stabilize upon approach.

Ford carriers, for example, are built with what’s called Advanced Arresting Gear intended to increase landing precision and essentially stop a fighter in motion as it intersects with the flight deck.  Metal cables—or arresting wires attached to hydraulic engines—help slow the aircraft upon approach. The cable is four to six inches above the deck of the carrier and hydraulic fluid controls the pace of deceleration for the aircraft, Wilson said. A hook lowers from the back end of the F-35C aircraft because it was designed to catch the cable and slow down the plane.

Interestingly, many years ago when the first F-35C ever landed onboard the USS Nimitz off the coast of California in 2014, a pilot explained carrier landing to me as a “controlled crash,” meaning it involved some force and pressure as part of a small collision.

The F-35C in particular is built to be larger and more durable than the other two variants, in part to ensure it can successfully withstand the process of landing on a carrier deck. The F-35C aircraft has an internal “hook” embedded in the aircraft to preserve its stealth configuration, which then opens to catch the cable upon landing.