The Legendary C-130 Cargo Plane Is Ready for the Arctic 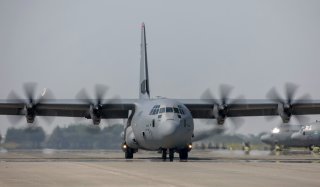 “We are the only heavy airlift able to reach these remote polar camps. These new engines allow for greater range and capacity. We’re advancing the Arctic Strategy that much more,” Maj. Jim Roth, 109th MXS commander, said in an Air Force essay published in March.

Air Force engineers explained that the updated engine uses different types of metal in the turbine and compressor which “have better heat retention, giving us the same power at lower temperatures.”

The upgraded engine is 20 percent more fuel efficient, something which of course can increase range for cargo and troop transport missions. The most significant element of the enhancement, however, is its ability to generate more thrust to help the C-130 take off in ice or heavy snow.

Increasing flight and operational capabilities for the C-130 is significant in many key respects, in part because the service continues to implement a series of substantial upgrades and enhancements to extend the aircraft’s service life. The center wing box is being reinforced to ensure the structure, and the airframe remains sturdy and intact. C-130s have also received new digital avionics, a glass cockpit, and new radios along with new propeller technologies.

The Air Force is already experimenting with using the C-130 to launch drones, fire lasers, or drop bombs as though it were a full combat platform. The rationale, senior Air Force leaders have said, is to recognize that cargo planes are enemy targets regardless of whether they are armed or not. Therefore it makes sense for the service to further weaponize the platform.

Improving the C-130 to embrace a broader mission scope and increase its ability to operate effectively during long missions in cold weather conditions makes sense for the aircraft. The C-130 was initially conceived of as a “propeller” aircraft able to land in rough, uneven, or austere locations where rock, dirt, dust, or debris might interfere with engine functionality and impact its flight path.