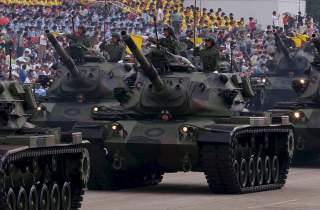 In “The United States Must Be Realistic on Taiwan,” Lyle Goldstein, writing on this site, misreads Taiwan’s history, portrays Chinese territorial ambitions as benign, and essentially argues Washington must do what China says because it has weapons. To makes these points, he neglects crucial facts and endorses pro-Beijing arguments that have now been discredited. In addition, he manages to misrepresent my views, sling epithets, resort to innuendo, and include an unrelated personal attack.

Personally, I’m appalled, but I will put my feelings aside in order to address the most important geopolitical issue facing Goldstein, me, and everyone else on the planet: How does the world contain persistent Chinese expansionism?

“Besides the usual platitudes about supporting democracy and relying on deterrence,” Goldstein writes, “Chang offers no specific policy prescriptions.”

Here, Professor Goldstein, is as specific as I can be: The president of the United States should publicly declare the U.S. will consider an attack against Taiwan an attack on itself. This declaration should be immediately followed with the offer to Taiwan of a mutual defense treaty including an Article 5-type obligation to defend.

Such a clear and resolute course of action offers the United States, the region, and the world the best chance to avoid armed conflict with China. Without it, such conflict is extremely likely.

Goldstein, a professor at the Naval War College, says that in the “unlikely” event China “emerges as a genuine aggressor state” Washington will have to draw “a defensible ‘red line.’ ” Taiwan should be outside that line, he argues.

Goldstein’s position makes us recall two events. First, Secretary of State Dean Acheson in January 1950 publicly drew a line of defense that did not include South Korea. Seeing the omission, Mao Zedong and Josef Stalin gave approval to Kim Il Sung to invade the South.

Writing in these pages, Joseph Bosco of the Washington, D.C.-based Center for Strategic and International Studies noted that China and North Korea “saw not a red line but a green light.”

The June 1950 invasion was too much for the American policy establishment, which had been unconcerned about the loss of the South just weeks earlier, to accept. An unprepared U.S. rushed to Seoul’s defense.

What we sometimes call the Forgotten War was also an unnecessary one. Kim was unlikely to have ever obtained the approvals of Moscow and Beijing if Acheson had declared Korea to be within the American defense perimeter. Goldstein’s call to publicly abandon Taiwan, therefore, is this decade’s equivalent of one of the worst mistakes in American diplomatic history. More than 36,000 Americans paid the price for a policy approach Goldstein now advocates.

Second, the State Department repeated this blunder. In July 1990, during growing tensions between Iraq and Kuwait, April Glaspie, Washington’s ambassador to Baghdad, privately told Saddam Hussein the U.S. had “no opinion on your Arab-Arab conflicts.” “The Kuwait issue,” she said, “is not associated with America.”

Eight days after the conversation, Saddam’s tanks rolled over the border into Kuwait. The U.S., despite what Glaspie said on the instructions of Secretary of State James Baker, then went to Kuwait’s defense.

Now Goldstein, incredibly, wants to apply to Taiwan the Acheson-Glaspie approach to aggressor management. Unfortunately, China is now run by a militant regime. How many wars does the Naval War College professor think we should wage before drawing his red line?

That line has to be drawn now to protect, among other states, Taiwan. Goldstein cites Kissinger, and so do I.

“Whenever peace—conceived as the avoidance of war—has been the primary objective of a power or a group of powers, the international system has been at the mercy of the most ruthless member of the international community,” Kissinger wrote in A World Restored: Metternich, Castlereagh and the Problems of Peace, 1812-22. “Whenever the international order has acknowledged that certain principles could not be compromised even for the sake of peace, stability based on an equilibrium of forces was at least conceivable.”

Maybe Goldstein wishes to accede to Chinese demands and therefore end up at Beijing’s mercy, but that idea is bound to create calamity.

Some people wonder whether war is hardwired into humans. I suspect it is not.

Humans periodically fight wars not because it is in their genes but because they make the same mistakes when confronted by aggressors. Let me put this another way. Wars start because aggressors read articles like Lyle Goldstein’s and think they can take what they want.