Littoral Combat Ships Will Bring Navy Firepower to the Pacific 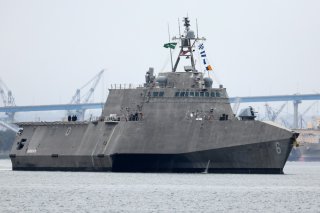 Despite the ship’s problem-ridden history, one of the U.S. Navy’s top officers wants to have six littoral Combat Ships operating in the western Pacific as deterrence against China.

Speaking during a media call, Vice Adm. Roy Kitchener, commander of Naval Surface Forces, explained that “in the Indy class [Independence-class], we continue to deploy them to the Western Pacific—trying to keep that 3.0 presence out there and build it to probably around 6 here in a few years.” USNI News first reported the call.

Kitchener noted that the Littoral Combat Ships the Navy sends out west would be armed with the Naval Strike Missile, a potent anti-ship munition that U.S. Navy is fielding across the fleet in increasingly high numbers.

Though the U.S. Navy has moved to decommission many of its Littoral Combat Ship Vessels—some years ahead of planned decommissioning, Kitchener explained that he is operating on the assumption that those vessels will be available to him.

“I continue to work to man, train and equip everything that we have on the books and I’ll continue to do that. So as I looked at decom strategies, the only issue I have with those as I try to influence is that I can’t just be pushing decommissionings… year by year because of the way the money flows,” Kitchener explained.

He added that the question mark surrounding the Littoral Combat Ship’s future “makes it very difficult for me to generate readiness. I suspect we will have LCS ships well into the future and that’s how I’m preparing them.”

The issue at the heart of the Littoral Combat Ships—a two-class grouping of vessels, represented by the Freedom-class and the Independence-class—has been unreliability and a complicated maintenance process. Still, the Navy has made some progress in approaching repairs and keeping the ships afloat.

“We’ve had a lot of success with reliability fixes and maintaining those ships on station, operationally longer. We still have some challenges as far as some of them systems and part of that is an effort of making sure we have the right parts at the point of need. There’s some scrutiny in the good work of Task Force LCS,” Kitchener explained.

“We really dove in with some analytics on understanding what parts we really needed out there. And we just had some recent success with coolers and things like that that were available for Charleston to keep them running,” he added.“I’ve been pretty happy with that, but there’s a lot more work to do, particularly if we want to build the force out there. We’ve gotten pretty adept at three, but I wouldn’t say that we’ve mastered it yet. So there’s some more work to do.”

Still, despite improvements in readiness, Kitchener added that he is still worried about the ship’s overall combat readiness. But ready or not, they’ll be increasingly deployed to the western Pacific. And, with their potent array of anti-ship weaponry, could still provide a deterrent effect.