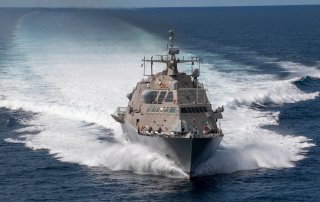 The U.S. Navy’s Freedom class, one of two classes of advanced but deeply flawed ships, will receive repairs vital to its propulsion system even though the ships are slated for decommissioning.

“In partnership with the U.S. Navy and RENK Group, Lockheed Martin successfully tested a combining gear modification on four Littoral Combat Ships. The next ship scheduled to receive the gear modification is USS Sioux City (LCS-11) when it returns from deployment. Any additional questions about the gear repair or the letter should go to the U.S. Navy public affairs office,” Lockheed Martin told USNI News.

As initially developed, the Freedom-class was designed to reach high sprint speeds thanks to dual gas turbine engines, which supplemented the diesel engines. However, a combining gear that mates the two power sources in the Freedom-class ships was faulty and prone to failure.

Though fixing the gear was necessary for achieving high sprint speeds, it is located deep in the ship’s hull in an area that is particularly difficult to reach.

A NAVSEA spokesman, Alan Baribeau, explained to USNI News that “the combining gears for LCS 31 were delivered to the shipyard with the correction incorporated from the gear factory.”

Given the Freedom class’ issues, as well as the other design flaws inherent to the ship’s sister design, the Independence class, the U.S. Navy decided to end their service lives much earlier than initially anticipated as a cost-saving measure.

“The Navy is pursuing a contractual process that allows the Navy and Lockheed Martin to conduct the repair in accordance with the terms of the original construction contract, including the cost-sharing provisions, to execute the combining gear correction,” Baribeau said.

So despite the fact that the Freedom-class ships—and the Littoral Combat Ship program as a whole—have not performed as intended, the U.S. Navy will move forward and repair the ships, irrespective of their looming decommissioning.