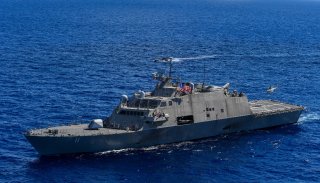 The future of the U.S. Navy’s Littoral Combat Ships (LCS)—two classes of swift, flexible, multi-mission ships—is unclear, with some in Congress pressing the U.S. Navy to retire the vessels from service as soon as possible.

On Wednesday, the House Armed Services Committee (HASC) approved an amendment to the Fiscal Year 2023 policy bill that would earmark millions in funding to save five out of the nine Littoral Combat Ships the U.S. Navy wants to retire. Still, consensus on the future of the ships is not unanimous.

Rep. Jackie Speier, a Democrat from California, illustrated her thoughts on the Littoral Combat Ships.

“We all know what lemon cars are. We have a fleet of lemon LCS ships. We have spent billions of dollars on this fleet when they have no capability to help us deal with [what] our largest threat is, which is that of China and Russia. The only winners have been the contractors on which the Navy relies for sustaining these ships,” Representative Speier said.

The issue at the heart of the Freedom-class ship’s controversy is an accident-prone combining gear that mates the ship’s diesel engines and gas turbines.

“However one feels about the LCS, there have been some arguments that have been made that I just find deeply troubling. One is, ‘well we already bought them, so why would we decommission them?’” HASC chairman Adam Smith, a Democrat from Washington, explained. “Good money after bad is about as cliché as it gets. But it is really important at this point... we have to pay to operate these things.”

“And they consistently break down and they consistently have incredibly high maintenance costs,” Representative Smith added. “So we’re paying money and we’re not getting much in the way of capability. We can save that money, spend it on other things that actually are capable.”

Rep. Rob Wittman, a Republican from Virginia and the ranking member of the HASC seapower and projection forces subcommittee, told USNI News that the LCS ships could still have some use with friendly nations or perhaps with the U.S. Marine Corps.

“This would be a great opportunity for the Coast Guard to be able to take a ship that has the capability I think that they would need – can move quickly, has the ability to deploy an 11-meter [rigid-hull inflatable boat]. Those are things that fit right within the Coast Guard mission,” Representative Wittman said.

“And the same for the Marines. I mean, the ability to move Marines back and forth – to do tactical support – this ship has some ability to do tactical support for Marines ashore. I think all those things are missions that would fit easily with LCS without any major modifications to it,” he continued. “So I think we need to exhaust all of those possibilities as we go down this road, and then if all of those are exhausted, then we can talk about [Foreign Military Sales]. But FMS does have to be part of the conversation.”

So while the Littoral Combat Ships have been plagued with issues—the bane of the U.S. Navy—is it unclear what their future will be, either with the U.S. Navy and the U.S. Marine Corps or with partner nations.