One of the U.S. Navy’s Troubled Littoral Combat Ships Has Sailed to Europe 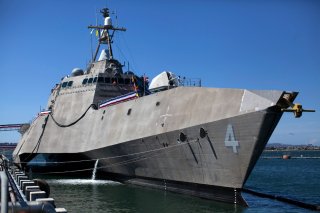 The USS Sioux City, one of the United States Navy’s Freedom-class Littoral Combat Ships (LCS), has arrived in Naples, Italy, for service with the Sixth Fleet.

“Sioux City’s deployment allows us to integrate the LCS’ unique operational capability into our already diverse fleet,” said Vice Admiral Gene Black, the commander of the U.S. Sixth Fleet, in a statement. “The agility of Littoral Combat Ships allows them to operate in both near-shore and open-ocean environments, enhancing our ability to provide security and stability across the European theater.”

The ship is in Italian waters nominally to help “U.S. and NATO Ally and Partner interests in Europe and Africa.” However, the deployment’s timing coincides with the largest war in Europe in nearly eight decades—a fact that the U.S. Navy’s Sixth fleet alluded to in their press release.

“USS Sioux City is a combat ready warship manned by battle-minded Sailors, who are prepared and equipped to execute any mission we are tasked with,” said Commander Scott Whitworth, the ship’s commanding officer. “This deployment will expand the relevance of these ships, particularly their ability to relieve larger surface combatants in key surface-mission areas.”

In addition to high operating costs—operating an LCS costs nearly as much as an Arleigh Burke-class destroyer—the Freedom-class ships have also suffered several high-profile breakdowns while at sea. Repairs, though possible, are time-consuming and expensive.

Despite the LCS’s soaring costs, they are still formidable warships. The Navy’s statement noted that the USS Sioux City benefits from high speed and agility attributes that allow the ship to undertake “maritime security operations, theater security cooperation engagements, and freedom of navigation patrols.”

The Sixth Fleet statement covering the deployment also alluded to the ship’s potential mission profiles, which include “keeping critical maritime commerce routes open, deterring conflict and coercion, and providing a comparable ship to strengthen partnerships with other countries.”

One country is likely at the forefront of the United States Navy’s thinking: the Russian Federation.

Though it is highly unlikely that a U.S. Navy ship would engage in combat with a ship of the Russian Navy, sending additional warships to Europe is particularly appreciated by European allies.

Although the U.S. Navy’s Littoral Combat Ships will eventually be consigned to the dustbin of American naval history, this latest LCS deployment is one of the class’ most important deployments.