Lockheed Martin Has a Big Idea for the Air Force: Merge an F-22 and F-35 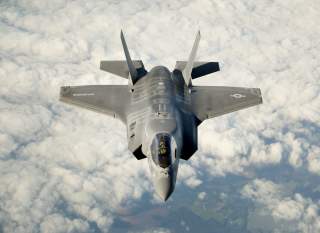 Lockheed Martin is reportedly pitching a new version of the stealthy F-22 Raptor air superiority fighter to the United States Air Force. But the new Raptor variant would not simply be a rehash of the original F-22, instead this new derivative would replace the original jet’s avionics and mission systems with hardware from Lockheed Martin’s F-35 Joint Strike Fighter. It would also incorporate structural modifications and possibly Pratt & Whitney F135 engines or Adaptive Engine Transition Program (AETP) motors in place of the F119 engines that are installed on the current Raptors.

As my former colleague Marcus Weisgerber reported for Defense One, the new F-22 derivative would incorporate the F-35’s much more modern mission system and “other advancements in the stealth coatings and things of that nature”—citing a person familiar with the proposal.

Developing an exportable foreign variant would add even more expense to the effort and could take more than six and half years, according to the Air Force report. Even with foreign assistance in funding a Raptor production restart effort, a new F-22 production line would be expensive. “The costs to restart production of the F-22 would be extensive even with the involvement of foreign partners,” the Air Force report states. “Just as F-22 production would compete for fiscal and contractor resources with other Air Force programs, any F-22 export would compete with FMS [foreign military sales] customers' resources as well, including countries already committed to F-35 purchases. Most nations are not likely to have the resources available for procurement of an export F-22, which extremely limits the ability of FMS to reduce the costs associated with restarting production.”

Those costs assessments are for a relatively simple restart of the F-22 production line, it does not include the cost, expense and difficulty of modifying the Raptor’s avionics, structure, propulsion and stealth features. Nor does the report account for the time and expense of conducting a completely new flight test program for what would essentially be a new aircraft in many ways. A new Raptor variant with new avionics, airframe and propulsion systems would be akin to the difference between the Boeing F/A-18A/B/C/D Hornet and the F/A-18E/F Super Hornet, which was essentially a completely new aircraft design.

The same report noted that the technology for the F-22 is already dated and that foreign great power challengers to the United States such as Russia and China would start to counter the Raptor’s capabilities by the time production could be restarted.

“The timeline associated with pursuing F-22 production restart would see new F-22 deliveries starting in the mid-to-late 2020s,” the Air Force stated in its report. “While the F-22 continues to remain the premier air superiority solution against the current threat, new production deliveries would start at a point where the F-22's capabilities will begin to be challenged by the advancing threats in the 2030 and beyond timeframe.”

Moreover, restarting the F-22 production line would compete with the U.S. Air Force’s next-generation Penetrating Counter Air (PCA) effort to develop a successor to the Raptor. “F-22 production re-start would also directly compete against the resources necessary to pursue the Chief of Staff of the Air Force-signed Air Superiority 2030 (AS 2030) Enterprise Capability Collaboration Team (ECCT) Flight Plan, which addresses the critical capabilities required to persist, survive, and be lethal in the rapidly evolving-highly-contested-Anti-Access/Area-Denial (A2/AD) threat environment,” the Air Force said in its report.

In fact, even if the Air Force were to receive additional funding specifically for a Raptor production restart effort, the service would prefer to allocate that money towards a next-generation air superiority capability. “If funding was provided from outside Air Force Total Obligation Authority (TOA) to assist in the capability and capacity challenges associated with prematurely ending F-22 production, the Air Force recommends that those resources be applied to the capability development plans outlined in the AS 2030 ECCT Flight Plan,” the Air Force stated.

The United States Air Force has already budgeted nearly a billion dollars to study an Air Superiority Family of Systems to replace the F-22 and the Boeing F-15C Eagle for which the service is currently conducting an analysis of alternative (AOA) for under the moniker Next-Generation Air Dominance (NGAD). The Penetrating Counter Air (PCA) is the “air domain platform component” of a future “family of capabilities” for air superiority. But that family of capabilities is more than just the PCA aircraft itself, it includes basing and logistics, communications, intelligence, surveillance and reconnaissance (ISR), command and control, as well as other platforms and weapons—both existing and future. Indeed, for the Air Force, air superiority will likely move beyond just the realm of kinetic actions to include non-kinetic effects such as electronic attack and cyber-warfare.

Increasingly, as Russia, China and other potential adversaries advance their capabilities , current American capabilities are increasingly challenged. Thus, ultimately, the Air Force will need to develop a new air superiority fighter to maintain American military supremacy. “Our adversaries have advanced both in terms of their platform and weapons maneuverability but we have advanced too, and I think that has fundamentally changed how we will conduct air-to-air operations in the future,” Col. Tom Coglitore, chief of Air Combat Command’s Air Superiority Core Function Team in an interview with The National Interest some time ago.