The Long Haul: How the Marines Are Preparing to Face China 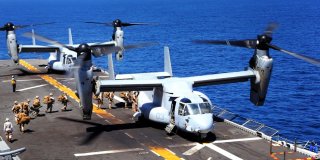 During a Maritime Security Dialogue event hosted by the Center for Strategic and International Studies, Gen. Eric Smith, the 36th Assistant Commandant of the Marine Corps, explained that in the event of a conflict in the Indo-Pacific, the U.S. Marine Corps must be able to “get to the fight.”

General Smith emphasized that the Marine Corps practices signature reduction and possesses long-range munitions, citing the combat experience of Ukrainians in the war against Russia. For example, the High Mobility Artillery Rocket Systems (HIMARS) and other long-range loitering munitions that have a clear anti-ship applicability to the Indo-Pacific theater.

“What’s different today is the threat,” General Smith explained. “That unit must be organized to fight tomorrow… you can’t wait until it is full baked” to make a decision on what kind of equipment, training, and positioning would be appropriate.

In modern combat against a peer rival, Marines and their equipment “have to be able to fire and move,” General Smith said, emphasizing that accurate counter-battery fire has all but eliminated the small window of opportunity for scoot-and-shoot tactics that towed artillery previously enjoyed. “If you’re static, you’re not going to do too well.”

The U.S. Marine Corps also has several advanced systems in testing, some from allied countries, that could give it a greater advantage in an Indo-Pacific conflict. For example, earlier this year, the U.S. Marine Corps experimented with Iron Dome, an Israeli air-defense system, against simulated cruise missile threats.

General Smith acknowledged that the U.S. Marine Corps could see itself in a combat scenario in which heavily-armored vehicles like tanks would be needed but justified the U.S. Marine Corps’ recent branch-wide tank divestment by citing the M1 Abrams tank’s heavier weight. The latest up-armored M1 variant weighs seventy-four tons, making it one of the heaviest tanks in service in the world, and extremely difficult to move from ship to shore quickly.

General Smith acknowledged the challenge of unit readiness, citing the example of the 22nd Marine Expeditionary Unit (MEU), which is tasked with going to Europe should the situation in Ukraine spiral out of control. He further explained that they were unable to make the trip due to a lack of transportation. “The readiness of our vessels is a challenge,” General Smith noted.