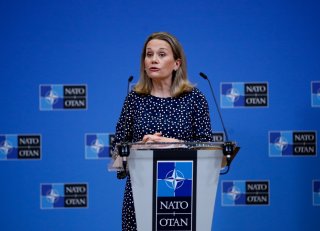 The North Atlantic Treaty Organization (NATO) is evolving its posture and expanding its scope to adjust to a new threat environment driven by Russia’s invasion of Ukraine.

The United States’ permanent representative to NATO, Amb. Julianne Smith, said she hopes Finland and Sweden will join the alliance during the upcoming NATO conference in Madrid.

“The two nations, long NATO partners, have military capabilities that would fit seamlessly into the alliance. The hope is that those two countries will join us in Madrid as invitees," Smith said.

At the Madrid conference, Smith explained, NATO leaders are expected to reevaluate force positioning and the alliance’s overall structural alignment with deployments.

A Pentagon-issued news report noted that “there is a force-posture piece to discussions in Madrid. The allies—including the United States—have sent thousands of service members to the alliance's frontline states to deter Putin. The number of NATO battle groups in those states increased from four to eight. Biden has pledged to defend every inch of NATO territory.” Smith noted that “[t]he allies will discuss how the long-range footprint of NATO forces in Europe should look.”

"What over the medium- and long-term should the alliance be looking to do in that neighborhood to reinforce NATO's eastern flank?" she asked.

Alongside deliberations about adjustments to longer-term force posture questions, NATO leaders are also looking at new kinds of threats in light of a rapidly-changing technological environment.

A stronger, better networked, and expanded NATO would greatly impact the security situation in Europe by dispersing a larger, more technologically advanced force in a position to respond quickly to any crisis. Should Sweden and Finland join NATO, the alliance would be well-positioned to respond if Russia invaded the Baltics. NATO air assets, for example, could be pre-positioned in Finland and help open up an attack corridor from the north with support from Poland to the south. In addition to supporting a broader range of contingencies, a force presence in Finland could also greatly reinforce the alliance’s deterrence posture.