The Marine Corps’ New Amphibious Combat Vehicle Will Deploy in 2022 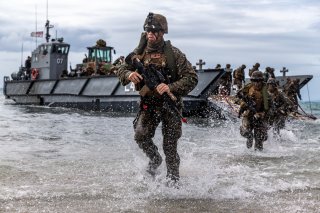 The Amphibious Combat Vehicle has been a long time coming. It replaces the Amphibious Assault Vehicle, the aging 1970s-era tracked personnel carrier. Although the tracked vehicle was state-of-the-art when it was first introduced into Marine Corps service, the vehicles have seen many long, rugged miles.

During the wars in Iraq and Afghanistan, the AAV’s abilities in the water were rarely, if ever, needed. In addition, the vehicle’s relatively lightweight aluminum armor proved to be insufficient to protect against the large improvised explosive devices that the Marine Corps and coalition forces faced in those conflicts.

It became clear that a replacement would be necessary long before those conflicts, though the Expeditionary Fighting Vehicle, one of the potential replacements, proved to be a failure.

The Expeditionary Fighting Vehicle was incredibly advanced. It could achieve very fast speeds in the water thanks to its dual high-power water jets, and its speed on land was sufficient. Ceramic, fiberglass, and Kevlar-like material offered effective, lightweight protection, while a stabilized 30mm main gun gave the platform offensive firepower to boot.

Unfortunately, the vehicle suffered from key mechanical and political issues. Given the United States’ involvement in the Middle East, an amphibious vehicle was unnecessary, and the project was ultimately terminated.

“We see ourselves in the leading edge of the new vehicle implementation, and we want to make sure we don’t pass up any opportunity to advance the tactics, techniques, and procedures … to take it to the fight,” Capt. Pete Reibe told USNI News. “That’s what it’s all about—delivering Marines to the fight and making sure we can do it efficiently and effectively. So, we take that role very seriously.”

Given the growing importance of the Indo-Pacific region, it is little wonder that the U.S. Marine Corps is again putting a high emphasis on maritime operations.