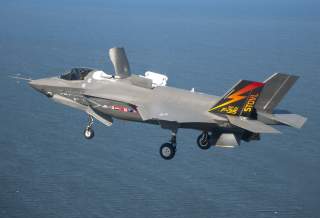 The Corps proved, in a fall 2018 demonstration in Arizona, that an F-35 stealth fighter can pass targeting data to a rocket battery, improving its accuracy. A Marine F-35B detected a metal container on the ground and passed the GPS coordinates via radio data-link to the HIMARS crew.

(This first appeared back in December of last year.)