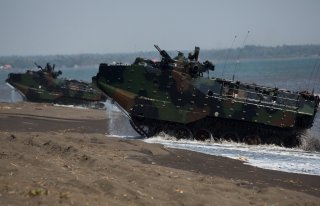 United States Marine Rotational Force-Darwin 22, the Corp’s presence in Australia, conducted a “trans-pacific tactical redeployment” of both forces and equipment, relying on aviation elements to put the Marine Corps’ reaction time and long-range air assets to the test.

“I want to maximize the training value of every event, and take advantage of opportunities allowing us to demonstrate particularly our HADR proficiency in the Indo-Pacific,” said Marine Col. Chris Steele, the MRF-D 22 commander, in addition to explaining his commander’s intent for the Marine Corps Air Ground Task Force.

“This is also an opportunity to provide once-in-a-lifetime experiences to our Marines and Sailors and that is also important to us.”

The Marine Corps statement explained that the exercises “featured a five-day transit of key terrain in the South Pacific, with a section of MV-22 Ospreys supported by a C-130.”

It added that Marines and Sailors stationed in Australia “along with the 1st Marine Aircraft Wing supporting effort traveled from Darwin to Amberley in Queensland, Australia, then to Fiji, American Samoa, Kiribati, and finished at the MRF-D ACE home station of Kaneohe Bay, Hawaii.”

The Indo-Pacific—American military parlance for the Pacific Ocean and surrounding land features—is the world’s largest ocean and poses a serious challenge to Marine Corps operations.

It is difficult to keep Soldiers, Sailors, and Marines supplied with beans, bullets, and bandages in any combat theater, but most especially in the Pacific. But how to overcome this tyranny of distance? The Marine Corps believes it could rely, at least partially, on the V-22 Osprey and leverage the tiltrotor’s high range.

In addition to rapidly responding to various challenges and keeping Marines resupplied via airlift, the Corps is also looking to leverage sea assets to move supplies and Marines around the Pacific.

“While geographically convenient, the locations visited during TACREDEPLOY also mark historic sites for the Marine Corps as we remember nearly 80 years after many South Pacific milestones during World War II. Fiji and American Samoa both served as staging bases and supply hubs for the U.S. and its allies during the war,” the Marine Corps statement explained.

“A Fijian regiment supported operations in the Solomon Islands, where the 1st Marine Division first cut its teeth in the region. Kiribati’s capital, South Tarawa, was the site of one of the most ferocious victories for the Marine Corps.”

And, “in a bit of historic symmetry,” the deployment “started in Australia and ended in Hawaii, two of the most significant locations during the war, and two areas critical to maintain a free and open Indo-Pacific today.”