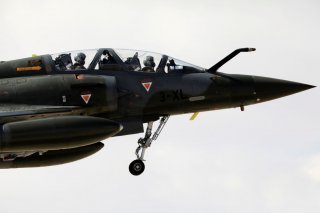 Key point: The USAF works hard to prepare against a wide variety of enemies. This means practicing war against foreign-made fighters.

On October 18, the U.S. Air Force awarded a $6.4 to $7.5 billion dollar contract to seven private companies to provide aggressor air combat training services to the Air Force through 2024.

That huge sum is all dedicated to one goal: sharpening the skills of Air Force fighter pilots by putting them in realistic air battles against foreign jet fighters.

The U.S. military introduced aggressor squadrons back in the 1960s after learning in air combat over Vietnam that fighter jocks needed to practice fighting dissimilar aircraft using dissimilar tactics. Just because those aircraft might be deemed technologically inferior didn’t mean their pilots couldn’t cleverly employ them in ways that exploited weaknesses in American fighters and pilot training.

For example, the supersonic American F-4 Phantom had sophisticated radar and Sparrow missiles that allowed them to engage subsonic, cannon-armed MiG-17 fighters from miles away. But the North Vietnamese naturally didn’t go along with the American playbook.

Their controllers devised tactics that minimized their exposure to long-range attacks, allowing them to engage in close-range dogfights American pilots hadn’t trained for and the more primitive Soviet jet’s maneuverability and cannons gave it an advantage.

Learning from this, the Air Force and Navy formed “aggressor” training squadrons using aircraft like the F-5 Freedom Fighter and A-4 Skyhawk to simulate the performance profile of various Soviet jets.

But despite its immense value, the Air Force is now struggling to afford the costs of operating Aggressor units—particularly those equipped with modern U.S. fighters which cost tens of thousands of dollars per flight hour. Nor can it easily spare the personnel due to the heavy operational demands placed on Air Force squadrons.

Thus, in 2015, the Air Force turned to a novel new solution: it began hiring private companies operating fleets of old, cheap-to-fly foreign jet fighters to serve as the aggressors for training.

The latest huge contract shows that the Air Force considers that initiative to be a success, and is broadly committing to the privately-operated model of aggressor training. Furthermore, its dispersing funding amongst over a half-dozen companies operating a wide variety of aircraft.

Let’s take a look at some of the higher-performing fighters the Air Force is excited to have its pilots tangle with.

The French Mirage III was the iconic delta-winged Cold War fighter known for its Mach 2 speeds—though that strength was balanced by low maneuverability and lack of radar. The Mirage saw plenty of combat on both sides of the Arab-Israeli wars, where it earned a respectable reputation.

Later, Israel ordered fifty superior Mirage V multi-role fighters, but the export was blocked by an embargo. Nonetheless, Mirage 5 components and schematics were smuggled into Israel and assembled there as the IAI Nesher.

IAI then set about devising a domestic ‘super’ version of the Mirage V: the Kfir, powered by the J-79 turbojet used in the F-4 Phantom, and featuring small canards (a second pair of small wings near the nose of the plane) to improve maneuverability and low-speed handling—an area of weakness for delta-wing aircraft like the Mirage.

The Kfir served in Israel and was exported and saw combat with Columbia, Ecuador and Sri Lanka. In the 1980s, the Marine Corps obtained early-model Kfirs, designated F-21A Lions, to serve as aggressors. Their combination of high-speed but relatively poor maneuverability made them a good platform to emulate the third-generation Soviet MiG-23.

Who operates them? Textron’s Airborne Tactical Advantage Company (ATAC) has six Kfirs. In 2012, a seventh crashed in a fatal accident at Naval Air Station Fallon.

South African company Atlas Aviation ripped out 50 percent of the Mirage III’s components, adding in fixed canards to improve maneuverability, aerial refueling probes, electronic warfare systems improved radar, missile warning devices, and a revolutionary helmet-mounted sight that allowed short-ranged missiles to be targets with a flick of the pilot’s head. The cheetahs don’t appear to have seen action but were upgraded several more times before being retired in favor of modern Swedish Gripen fighters imported in the post-Apartheid era.

Who operates them? Draken International has twelve of the Mach 2 fighters, which are considered sufficiently upgraded to nearly emulate the capabilities of fourth-generation fighters.

The F1 improved on the Mirage 5 by featuring a higher, more swept wing that greatly improved maneuverability and takeoff performance while maintaining Mach 2 capability. It also saw a major avionic upgrade with the introduction of a Cyrano-IV radar with multi-mode capabilities.

Armed with 30-millimeter cannons and R550 Magic missiles (comparable to the U.S. Sidewinder), the F1 was extensively exported, and saw extensive combat service, particularly in the Iraqi Air Force’s duels with Iranian F- Phantoms, F-5 F-5E Tiger IIs and F-14 Tomcats. Iraq lost thirty-three F1s, which in turned claimed thirty-five kills. During the 1991 Gulf War, at least eight more were destroyed in the air, while two dozen fled to Iran where they remain in Iranian service.

The L-159 is a post-Soviet-era Czech evolution of the widely-operated L-39 Albatross jet trainer, fitted to carry Sidewinder air-to-air missiles and various ground-attack munitions on seven hardpoints. As well as serving in the Czech Air Force, the L-159 has been used in combat against ISIS by the Iraqi Air Force.

Though comparatively a subsonic slow-poke, the Honey Badger is agile and has an Italian Grifo-L doppler multi-mode radar which can be used to simulate a variety of enemy systems. Thus the Honey Badger has served as useful opponents in Air Force training exercises.

Who operates them? Red Draken has 21 L-159Es. Note that the L-39 and L-59 Super Albatross are also operated by ATAC Draken, Air USA and Coastal Defense.

There is arguably no Soviet fighter which has carved out quite as iconic a reputation as the MiG-21, distinguished by its small stubby wings, its open mouth jet-intake and the pointy radar nose cone poking through it.

Pitted against the far beefier twin-engine F-4 Phantom in the Vietnam War, the more agile single-engine MiG-21 held its own despite its shorter range and much smaller weapons load.

Today, hundreds of MiG-21s and J-7s (a Chinese clone) upgraded with more powerful radars and longer missiles continue to serve in large numbers in the Air Forces of China, India and in smaller number throughout Africa, Asia and Europe.

Other supersonic jets that may be in the mix are two-seat MiG-29UBs tactical fighter flown by Air USA, F-5AT Tiger IIs flown by TacAir, and early-model American F-16A fighters ordered by Canadian company Top Aces.

To practice against subsonic dogfighters, several companies operate various versions of the venerable A-4 Skyhawk attack jet and the 1950s-era Hawker Hunter fighter, both of which saw extensive air combat during the Cold War, as well as light attack trainers like the Alpha Jet, BAe Hawk, Jet Provost, MB-339 and Strikemaster.