Meet the American-Built Ships Ukraine Will Soon Sail (But Will Russia Care?) 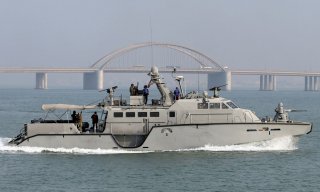 Although Ukraine has received assistance in their land war against Russian-backed separatists, including some of America’s powerful Javelin anti-tank missiles, this latest aid package is focused on naval support. “Support of the Ukrainian Navy is an important part of the assistance, which should contribute to the establishment of stability and security in the Azov and Black Sea regions,” the Ministry stated.

In November of 2018, the Russian FSB violently captured three Ukrainian patrol boats that were transitioning through the Kerch Strait into the Sea of Azov northwest of Russian-occupied Crimea. During that action, twenty-four Ukrainian sailors were detained. Though the soldiers were eventually repatriated to Ukraine, the three Ukrainian ships—one corvette, one minesweeper, and one smaller-sized gunboat were not. Combined with Ukrainian Navy defections to Russia during the 2014 Russian annexation of Crimea, Ukraine’s Black Sea fleet is depleted and understrength.

In June, the State Department approved a $600 million sale of sixteen Mark VI Patrol Boats to Ukraine. These boats would help “improve Ukraine’s capability to meet current and future threats by providing a modern, fast, short-range vessel. Ukraine will utilize the vessels to better defend its territorial waters and protect other maritime interests.”

The Sea of Azov is relatively shallow, making it difficult for larger blue-water ships to operate—but the Mark VIs are optimized for near-shore operations.

The Mark VIs are small, fast littoral boats, designed to operate close to shore where they can conduct maritime patrols, boarding operations and interdictions, or support special operations missions. They have a shallow draft, the measure between the hull bottom and waterline, allowing the quick boats to get close into shore. And these boats are armed to the teeth.

In addition to two .50 caliber machine guns, there are multiple points for other smaller machine guns to be mounted In American service, the Mark VI is armed with a large 30 millimeter cannon, though in Ukrainian service the larger main gun was not approved. Still, the Ukrainian boats have space onboard for two 25 millimeter guns.

In addition to the Mark VIs, the United States sent two Coast Guard Island-class cutters to Ukraine last year. The retired boats are part of a four-boat cutter donation that is intended to beef up Ukraine’s naval defenses. Last summer, Ukrainian sailors conducted training in Baltimore, Maryland to familiarize themselves with the boat’s navigation system and bridge controls. These cutters are relatively lightly armed and sport at least two .50 caliber machine guns and a single 25-millimeter chain gun.

Though somewhat symbolic, American naval support affirms the United States’ commitment to Ukraine. Still, with Russia possibly in violation of the Montreux Convention, a few patrol boats won’t tip the balance of power in Ukraine’s favor. Still, it is the support that Ukraine desperately needs.