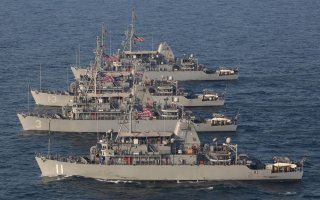 Northrop and the Navy are fast-tracking a cutting edge mine-warfare hunting system able to quickly complete four out of five key elements of mine warfare—detection, localization, classification and identification.

It’s called the AQS-24, an emerging system that uses underwater laser side-scanning. Speaking in January 2020 at the Surface Navy Association Symposium, Capt. Danielle George, Mine Warfare Programs Manager, said the Navy plans to deploy the AQS-24C as soon as this year. The AQS-24C, described by George as a Volume Search Sonar, is an upgrade to existing “A” and “B” variants. It is a cylindrical vehicle towed through the water beneath an Unmanned Surface Vehicle (USV). USVs, quickly becoming more autonomous, can be remotely operated by a ship or shore station miles away.

“Think of it as being able to double the speed you can operate at, because we are pinging at the same rate but we go twice as fast. We figured out how to do that. We still get the benefits of synthetic aperture sonar. We get the benefit of going 18 knots and we maintain the benefit of high resolution. We maintain the same resolution over the full speed range of the vehicle,” Gene Cumm, Director of International Mine Warfare Programs, Northrop Grumman, told Warrior.

Cumm explained that the success of the system hinges upon two distinct optical windows; one optical window transmits a beam of light on a rotating shaft to emit a laser beam across the bottom, while the other optical window functions as a receiver.

“One of the mirrors has a laser light fired against it. The mirror transmits an image to the sea floor. The second mirror is looking for reflected energy from that laser light, creating an optical image of what is on the bottom,” Cumm said. ​

Interestingly, the advantages of laser side scanning underwater were anticipated, if not predicted, in a 2015 essay from the National Institute of Health, called “Optical Sensor and Methods for Underwater 3D.” (US National Library of Medicine, National Institutes of Health. ...Massot-Campos, Oliver-Codina).

The essay seems to foreshadow the AQS-24, stating “regarding the foreseeable future, more research on laser-based structured light and on laser line scanning underwater is needed. These new devices should be able to scan while the sensor is moving….software development and enhanced drivers are required.”

Scanning at high-speeds, described as a way to bring increased value to undersea sensing, is precisely what the AQS-24 is engineered to do. While lasers have been working on the Northrop Grumman undersea sensor system since 2005, the 2015 essay also seems to suggest that improved, modern laser technology can generate images with new levels of precision, clarity and resolution, therefore reducing the effects of obscurants and “scattering” likely to compromise image quality. With these technical challenges in mind, Northrop Grumman has recently updated its laser to address these challenges.

“Another challenge for the future is to develop imaging systems that can eliminate or reduce scattering while imaging. Solutions such as pulse gated cameras and laser emitters are effective, but still expensive,” the essay states.

“In the past when you would find contact on a sonar, you would hand it off to a diver or use a remotely operated camera,” Cumm, told Warrior.

“The fourth aspect, mine ID, is performed by the laser,” Cumm said. The 5th tenet of mine warfare, Cumm added, is mine “neutralization.” Performing this mission, Northrop Grumman developers explain, relies upon sonar and laser scanning technology complementing one another. For instance, the sonar scans a wide field of view at longer ranges than the laser, pointing the laser-imaging technology toward a threat or area of interest.