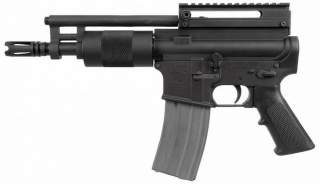 For years the AR-15 pistol had a rough time in the handgun and personal defense weapon markets. Reviews tended to be critical or even dismissive. Some even openly mocked the weapon for its supposed impracticality. The public wasn’t very interested in it other than as a novelty gun.

There was good reason for that.

The pistol version of the popular semi-automatic rifle didn’t offer many advantages over its longer-barrel counterpart, and in fact suffered several disadvantages.

The shorter barrel meant less accuracy and power, even when firing the same ammunition. It also made the weapon more cumbersome to shoot and significantly increased recoil, muzzle flash and noise.

Numerous submachine guns or handguns could obviously fill any role the AR pistol could, and there were already other rifle-action pistols on the market. There were also lingering questions about the designation and legality of the gun.

To top it all off, the AR-15 pistol just looks kind of funny.

The only evident advantage of the AR-15 pistol was that it was more maneuverable than the rifle versions were — and that could be helpful in close quarters or dense jungles.

Things began to change a couple of years ago. Trade publications have been writing more positive reviews of the AR pistol, gun enthusiasts began praising it and manufacturers started offering a wider array of accessories.

Manufacturers started producing pistols that accepted AR-15/M-16 magazines and standard NATO .223 cartridges in the early 1970s. The Bushmaster Arm Pistol, in production in various models from 1972 to 1988, included additional components from the AR-15 rifle.

By the mid-1990s, several manufacturers were selling AR-15 pistols made with the same upper and lower receiver as the rifle, but the gun still wasn’t really catching on in the civilian market. This may have been due in part to people not really understanding what function the weapon served.

If someone needed the firepower of the AR-15, it would usually make more sense to get the 20-inch-barrel rifle or 16-inch-barrel carbine. They were more accurate and easier to control when firing. If you were looking for the portability and maneuverability of a sidearm, there was an abundance of smaller and lighter handguns that still packed substantial firepower.

And most models of the AR-15 pistol aren’t a sleek, sexy gun. Using the rifle receivers with much shorter barrels — as short as 7.5 inches — gives the pistol a boxy, bulky look. Most models also come with a conspicuous buffer tube that protrudes several inches from the rear of the receiver.

In 1993 Olympic Arms began selling a version of the AR-15 pistol with a modified gas system and recoil spring so the gun would not require a buffer tube, thus making the OA-93 a “true pistol.” It was definitely a more streamlined design.

Around the same time that the OA-93 hit the market, there was a bit of a push to popularize the AR-15 pistol. The gun made prominent appearances in several major Hollywood films, including Clear and Present Danger and Bad Boys in 1995 and Spawn in 1997, with the OA being the preferred make.

While the gun continued to improve in looks and performance, there were still lingering questions about its legality and designation. As recent as 2015, there were still rumors that the Bureau of Alcohol, Tobacco, Firearms and Explosives considered any AR-15 pistol with a brace or stabilizer attached to the rear of the gun to be a short-barreled rifle.

Any rifle with a barrel under 16 inches falls into that category, and the owner of such a weapon is required to register it as an SBR and pay a $200 fee. Failing to do so could result in legal prosecution. Adding a vertical forward grip could also transform the pistol into a rifle in the ATF’s opinion.

While AR-15 pistols with only a buffer tube would fall under the designation of a pistol, many believed that adding any sort of stock or brace or stabilizer would either cost them an extra $200 or lead to legal trouble. Some gun advocates warned that even the buffer could raise suspicions if an AR-15 pistol was found during a traffic stop and lead to prolonged questioning and perhaps even a call to the local ATF office for clarification.

There’s now a general consensus among advocates and manufacturers that attaching braces and stabilizers doesn’t change the legal designation of the gun. However, firearm laws vary from state to state, and their still may be prohibitions on certain types of accessories in some states or local jurisdictions.

It seems that satisfying — at least to a considerable extent — the ATF legal question opened up people’s minds about the weapon. Last year, reviewers started looking at the AR-15 with a friendlier eye. And they’ve been getting positive feedback from readers.

In March 2016, All Outdoor described the AR pistol as “freaking cool” and argued that it is a “really viable hunting and defensive tools.” American Rifleman followed up with a review in October 2016 in which B. Gil Horman also defended the viability of the AR pistol for self-defense and home protection. Horman highlighted the changing perception of the weapon in his review.

“In January of 2015, I was examining a new AR pistol at SHOT Show when a well-known media personality and shooting instructor I know strolled up to the display and shook his head,” Horman writes. “In his opinion, AR pistols were utterly, totally and completely useless in every way. In short, he would rather fend off a home invasion with a brick than one of those things. It seems safe to say his comments qualify as a vote against it.”

That shaped Horman’s opinion of the gun, until an article he later wrote about popular trunk guns elicited a surprising amount of positive feedback from fans of the AR-15 pistol.

“Months later, I received an unexpected response to a piece we posted about trunk guns,” Horman continued.

“It was interesting to note the number of readers who chimed in to let me know that I had left their preferred trunk gun off the list, namely, the AR-15 pistol. On the one hand its critics’ pan the AR pistol as if it were a badly written big-budget Hollywood movie while fans of the platform are lining up for tickets.”

Horman decided to run the gun through his own battery of tests, spending months range testing various builds of AR-15 pistols. In the end, he concluded that the weapon definitely has its merits.

On the downside, the shorter barrels led to a significant decrease in bullet velocity accompanied by an increase in noise and muzzle flash, which Horman said was so bad that it could be disorienting to inexperienced operators attempting to use the weapon in close quarters for home protection.

However, he noted that the AR pistols he tested were more accurate at 25 yards than many other handguns were. He complimented its “ammunition capacity and caliber options.”

To give some idea of the the pistol’s accuracy, at 25 yards with a Leupold Deltapoint Pro 2.5 MOA red dot sight and Leupold Pro Cross Slot Mount on an AR pistol he built, Horman had an average extreme spread of 1.13 inches in five-shot groupings with both 7.5-inch and nine-inch barrel variants using multiple types of ammo.

Horman said that he was reluctant to fully endorse the AR pistol for home protection with an operator who was not experienced with the weapon, but that overall the guns he tested were “impressive performers.”

He’s not alone in his new-found admiration for the gun. YouTube is full of videos of enthusiasts applauding the AR-15 pistol. One YouTuber even joyously boasts that he can legally concealed-carry his AR pistol — with a permit — in the state of North Carolina.

Manufacturers have clearly noticed their is now definitely a market for the weapons as well, and have started offering a wide array of accessories and components specifically for AR-15 pistols. Pistol cheek rest kits and stabilizing braces that slide over the buffer tube being among the most popular accessories.

The AR-15 pistol still might not have the cult following of other rifle-action pistols, like the AK-47 Micro Draco, but it looks like it is finally coming into its own and earning some respect.