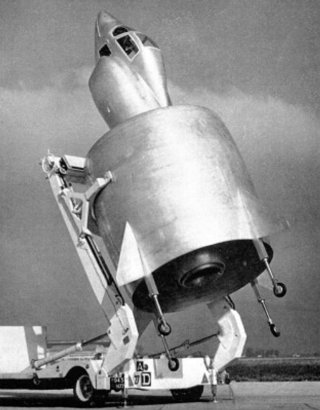 In the heady opening years of the Cold War, war planners assumed that the next European war’s opening salvos would have a nuclear start. The thinking was that high priority and immobile targets like communication centers, command posts, and airfields would be the first targets taken out by massive mushroom-causing explosions. In order to protect their air forces, a number of countries embarked on early versions of vertical take-off and landing (VTOL) airplane designs.

The rationale was that if an air force could be decentralized, that is away from airfields, they would be better protected thanks to their dispersion. And this reasoning is not without its merits. Several airplane designs, including the Marine Corps variant of the American-designed F-35 Lightning II is VSTOL capable and so can take off from and land in austere battlefield environments, far away from airstrips. While the F-35 design is a capable vertical take-off and landing design, some of the earlier designs were rather odd, to say the least.

A couple of the earlier American designs were similar to this French contraption, though they used conventional wings. Like the XYF Pogo, the C.450 had several wheels on its rear with which to take off and land from, though this is where similarities—aside from paint schemes—end.

The French-designed SNECMA Coléoptère as this odd-looking plane was also called, used an annular wing design. Unlike conventional wings, annular wing designs lack wingtips. The plane’s fuselage is enclosed by a wing-ring that provides lift. The wing had four small winglets on the outside edge, and the pilot sat in an adjustable, rotating seat that would in theory have allowed for decent visibility while taking off skyward and during level flight.

Alas, the ungainly French plane was not meant to be. Though it was able to take off and successfully completed several tests and flights, it had difficulty keeping airborne—a crucial requirement for any airplane. During its last test flight, the airframe attempted a test maneuver, but lost speed which could not be recovered and crashed back down towards the Earth.

Thankfully these kinds of radical VSTOL designs were abandoned in favor of more conventional jet planes, though working out kinks in the design process was rather lengthy. The first truly successful design, the British Harrier jump-jet, was a much more conventional aircraft and officially entered service in the late 1960s, approximately ten years after the development and retirement of the C.450. Despite its lack of success as a vertical take-off and landing jet plane, the C.450 Coléoptère tried hard to keep France safe from the bomb. Hats off for trying.