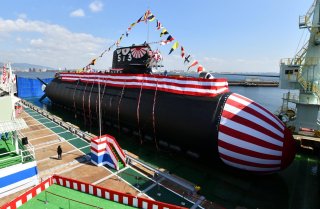 Japan unveiled the first of its new class of diesel-electric submarines in October 2020. Named the Taigei, the submarine is part of Tokyo’s efforts to boost the country's maritime security and as a show of deterrence against China's growing assertiveness in the eastern Pacific region.

Taigei—meaning big whale—was launched at the Mitsubishi Heavy Industries shipyard in the city of Kobe, and it is the first of the class that will succeed the Japanese Maritime Self-Defense Force (JMSDF) current Soryu-class boats. The three-thousand-ton diesel-electric attack submarines were developed as the S9SS class and named after the twenty-ninth year of the Emperor Akihito’s reign in Japan. They measure 84 meters or approximately 275 feet in length. As with the Soryu-class, the Taigei is equipped with lithium-ion batteries as its power source.

Japan has been a leading innovator of battery technology and has claimed that as a power source for the submarines because it requires less maintenance. More importantly, it could enable longer endurance at high speeds compared to lead-acid batteries that are used on many submarines around the world. This would make Japan the only known country to have operational submarines utilizing lithium-ion batteries, DefenseNews previously reported.

Similar in size to the Soryu-class, this new JMSDF boat features a reduced wheelhouse that is partially integrated into the ship's hull Soryu-class boats and which could reduce the hydrodynamic resistance when driving in a submerged position. That in turn could further improve the battery performance. In addition, the capabilities of its sonar and combat command systems have been improved, while the submarine has also been fitted with improved acoustic absorbent materials as well as a floating floor structure to reduce noise.

The Taigei is armed with six 533-millimeter tube launchers for torpedoes and cruise missiles and is also outfitted with Torpedo Counter Measures, which can be used to eject decoys to evade enemy torpedoes and provide improved survivability. The submarine will have a crew of around seventy sailors.

This newest Japanese-produced submarine is currently scheduled to enter the JMSDF in 2022, and it will next undergo fitting out and sea trials. When operational, Taigei will become the twenty-second class of submarines in service with the JMSDF—and allow the service to reach its goal to have that many boats in its submarine fleet. That was a decision that was announced in Tokyo’s 2020 National Defense Program Guidelines, which came to address Chinese military modernization and increased aggression in the region.

The Japanese military is also currently building one additional Soryu-class submarine, which will bring the class to an even dozen, while seven Taigei-class boats are planned. As these newer submarines enter service, Japan will begin phase-out of its older Oyashio-class submarines. Japanese submarines have shorter service lives than other advanced navies, its submarines have closer to just twenty years compared to the thirty or more years of other subs. A benefit is that Tokyo can introduce new, more advanced designs faster.

That means that Japan could introduce even more advanced submarines in the early 2030s, which could allow its smaller submarine force to maintain its edge against the larger Chinese People’s Liberation Army Navy’s submarine fleet.