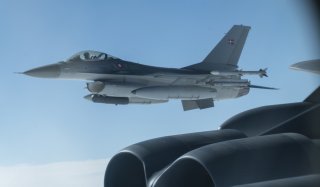 On Friday, six B-52 Stratofortress strategic bombers took part in an operation dubbed "Allied Sky" and flew across 30 NATO countries in a single-day mission that was meant to highlight solidarity with U.S. partners and allies. Four of the Cold War-era U.S. Air Force bombers were deployed from Royal Air Force (RAF) Fairford in the UK and flew over Europe, while two bombers from the 5th Bomb Wing at Minot Air Force Base, North Dakota flew over the U.S. and Canada.

The single-day mission was intended to demonstrate NATO solidarity, enhance readiness and provide training opportunities that were aimed at enhancing interoperability for all participating aircrews from the U.S. and NATO allies. Allied Sky was meant to be the latest iteration of Bomber Task Force (BTF) missions that have been conducted in the European theater of operations since 2018.

The Aviationist reported that the U.S. Air Force's four B-52s flying over Europe were escorted by a range of combat aircraft from NATO partners, which interestingly included some former Soviet aircraft – as Romania and Croatia still operate MiG-21s, while Poland and Bulgaria operate Mig-29s. Other aircraft included RAF Typhoons and FAF Mirage 2000, BAF F-16s while reportedly an Italian Air Force F-35 was also involved in the escort duties.

"U.S. security commitments to the NATO Alliance remain ironclad," said Gen. Tod Wolters, commander of U.S. European Command (USEUCOM). "(The) bomber task force mission is another example of how the Alliance sustains readiness, improves interoperability and demonstrates our ability to deliver on commitments from across the Atlantic."

The flights were largely uneventful except for a brief encounter with Russian military aircraft over the Black Sea. The U.S. military reported that two Russian 27 Flanker aircraft sent to "intercept" one of the B-52s flew in an unsafe and unprofessional manner while crossing within 100 feet of the nose of the American bomber.

"Actions like these increase the potential for midair collisions, are unnecessary, and inconsistent with good airmanship and international flight rules," said Gen. Jeff Harrigian, U.S. Air Forces in Europe-Air Forces Africa commander. "While the Russian aircraft were operating in international airspace, they jeopardized the safety of flight of the aircraft involved. We expect them to operate within international standards set to ensure safety and prevent accidents."

Additional B-52 Presence in Europe:

A B-52H bomber training missions also began at RAF Fairford last week, when Airmen from the 5th Bomb Wing arrived in the UK in support of a long-planned exercise. The 5th BW was deployed to Europe to demonstrate U.S. capability to command, control and conduct bomber missions across the globe.

"Our mission to assure our theater allies while deterring enemy aggression is bolstered with creative ways to operate throughout the European airspace and this sortie was a perfect example of how that synchronization can be accomplished," said Capt. Tom Heistuman, mission commander.

The B-52s, which are operated by the 23rd Bomb Squadron, are long-range nuclear and conventional heavy bombers. While the bombers date back to the 1950s, the upgrade B-52H bombers can still perform a variety of missions at subsonic speeds at high altitudes and the aircraft have a combat range of 8,800 miles while able to carry precision-guided ordnance with worldwide precision navigation.

The presence of the heavy strategic bombers at RAF Fairford is to enable the United States Air Force to maintain a high state of readiness and proficiency to operate at and in austere environments aboard and at home.