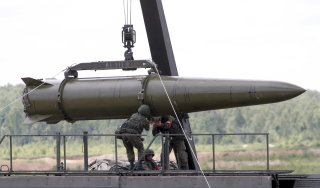 A blanket of satellites will orbit the earth, tracking and identifying hypersonic launches.

The Space Development Agency, an American agency that develops the United States's warfighting capability in space, just issued a considerable award as the first tranche of new missile tracking satellites.

Though somewhat confusing, the contract allows L3 Harris and Northrop Grumman to build a “space segment” that consists of  “two planes with seven space vehicles per plane—14 satellites from each performer for a total of 28 satellites in four planes—to collect infrared data and provide network communications. Each agreement includes a launch services segment for launch preparation, and a ground segment for operations and sustainment.”

The earth will, in essence, be encircled by an envelope of satellites that will be used to identify and track hypersonic missile launches from virtually anywhere on the globe.

“SDA is confident that selection of the L3 Harris and Northrop Grumman teams provides the best overall solution to accelerate delivery of a low-Earth orbit constellation with wide-field-of-view infrared sensors for a global missile warning and missile tracking capability in Tranche 1, on schedule. I’m pleased to see our industry partners building the marketplace necessary to quickly deliver new space capabilities to the warfighter.”

Interestingly, the SDA announcement explained that the tracking capability was explicitly aimed at bolstering the capabilities of Indo-Pacific Command, one of the United States military’s command theaters. In a potential conflict with China, the Indo-Pac command would be the command that would take on China.

Not only is today’s terrestrial environment more dangerous than it was a decade ago, but so too is space. Satellites that are a decade or more old were sent into space that was a more benign environment than it is today—and satellites that launch into space today or in the near future have to contend with that reality.

Both China and Russia conduct daily attacks on the United States satellite constellation through laser blinding and cyber-attacks—and potentially, in the future physical attacks too.

“The speed with which SDA pursued this effort is commendable, given the severity of the hypersonic missile threat,” said Christopher E. Kubasik, L3Harris Chair and Chief Executive Officer. He added that “this prime contract is a testament to our growing impact in the space community, and affirms our strategy of being a Trusted Disruptor is gaining traction.”

“We look forward to working with the Space Development Agency and our industry partners on the nation’s most pressing challenges in missile defense.”