Missiles Won’t Make It Past The Navy’s Upgraded Interceptor 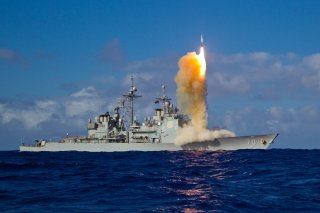 The Navy is continuing to develop the Naval Integrated Fire Control-Counter Air (NIFC-CA) program, an integrated threat detection and defense system capable of finding and destroying incoming anti-ship missiles from distances beyond the radar horizon. This technology connects ship-based fire control and radar with airborne sensors to target approaching attacks.

The NIFC-CA emerged several years ago as a breakthrough effort to network ship-based command and control, interceptor weapons, and over-the-horizon threat detection. Now active for several years, the NIFC-CA relies on a Hawkeye plane, drone, or even an F-35 fighter jet as an “aerial gateway” between beyond-the-horizon threat detection systems and ship-based weapons and interceptors. Functioning as an aerial node, the Hawkeye aircraft is able to detect incoming threats such as anti-ship missiles from distances beyond the reach of ship-based radar and relay threat data back to ship-based command and control systems.

Once the threat is identified, ship-based commanders can then determine an optimal counterattack option and launch an SM-6 interceptor missile to track and then take out the approaching threat from safer ranges. While first deployed on destroyers more than five years ago, the Hawkeye-enabled NIFC-CA system represents a point of departure for multi-domain surveillance, networking, and ship defenses. The SM-6 is an optimal part of the NIFC-CA because it is enabled with a dual-mode seeker that sends a forward “ping” from the missile itself before analyzing the return signal and adjusting course in flight to hit a moving target. In effect, the NIFC-CA gives ships the ability to see and destroy approaching threats from stand-off distances. Time and detection, when it comes to defending a warship, are matters of life and death.

Building upon this history of using the Hawkeye as an aerial node for the NIFC-CA, Northrop Grumman and the Navy are now taking the surveillance plane decades into the future through various adjustments and upgrades. The plan is to not only leverage these upgrades for the near term, but to position the aircraft and its technological components for continued modernization for years to come. Northrop Grumman is pursuing this through its XHawk Lab, a space dedicated to computer modeling and simulation designed to identify, test, and refine new technologies to integrate into the platform.