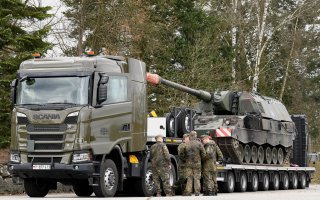 An additional seventy German troops were deployed to Lithuania on Monday, bringing Berlin’s total contingent within the country up to three hundred and sixty, according to Reuters.

The soldiers arrived at Lithuania’s Kaunas Airport aboard an Airbus A400M military aircraft on Monday afternoon. The new troops include reconnaissance specialists, artillery experts, and medics. In addition to their deployment, around one hundred howitzers and other vehicles are expected to arrive in Lithuania throughout the week.

The German deployment is part of a contingent of roughly 1,100 NATO troops present in Lithuania. An additional 3,900 troops are deployed throughout the Baltic states, each of which shares a land border with Russia.

Germany has advocated for calm and attempted to pursue diplomacy throughout the escalating crisis between Russia and Ukraine. In late January, Berlin prevented Estonia, the northernmost Baltic state, from transferring its German-built artillery to Ukraine. German’s decision kept in accordance with a long-standing policy preventing deployment of its weapons to active conflict areas.

Critics have alleged that Berlin’s less confrontational position on the Kremlin’s activities comes from its interest in the Nord Stream 2 pipeline between Russia and Germany, which would allow the country to easily purchase Russian natural gas after its upcoming regulatory approval.

In recent weeks, Germany has used tougher language against the Kremlin, indicating that it would impose heavy sanctions against Russia if it invaded Ukraine. It has also pursued other sources of natural gas in the event that its supply from Russia is cut off, including through imports of liquefied natural gas from the United States, Canada, and Qatar.

NATO has undertaken several deployments to the Baltic states since 2017 in response to escalating tensions in the region. In addition to the current deployments, the British government has pushed to reinforce its current battlegroup in Estonia. The president of Lithuania said last week that he would seek to establish a permanent U.S. base in the country, although the Biden administration has not commented on the prospects for such a base’s creation.