As Most of Europe Pulls Away from Russian Gas, Hungary Leans In 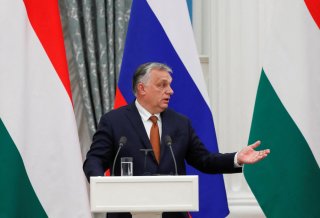 After a meeting with Russian president Vladimir Putin in Moscow on Tuesday, Hungarian prime minister Viktor Orban told reporters that he had requested an expansion to Hungary’s fifteen-year contract with Russian energy giant Gazprom, in theory allowing Hungary to receive larger deliveries even as gas prices continue to rise.

It was unclear if Orban’s declaration was related to a formal agreement signed between the two leaders. However, after the two leaders’ meeting, Putin claimed that he was in favor of increasing Russia’s gas supplies to Hungary by roughly one billion cubic meters per year. Putin also expressed support for signing a long-term pricing contract that would protect the Hungarian economy from gas price shocks.

Orban’s remarks appear to be a reflection of his nation’s close ties with Moscow even as the European Union and Russia have drawn further apart on many issues. Much of Europe has acknowledged, at least in principle, that Russian gas could be used as an economic weapon in the event of a military conflict in Eastern Europe. As a result, many European states have sought alternative supply chains.

As two of Europe’s longest-serving leaders, and each a subject of Western criticism for perceived authoritarianism, Orban and Putin have established a strong working relationship. Tuesday’s meeting marked the two leaders’ twelfth bilateral meeting since Orban’s election to the Hungarian prime ministership in 2010.

The meeting also marked the first time that Putin had met in person with a head of state of a NATO country since the beginning of the ongoing Russo-Ukrainian crisis. That crisis, which began in late 2021, has seen the massing of 130,000 Russian troops on the Ukrainian border in what some have characterized as a prelude to an invasion. Russian leaders have insisted that the Kremlin is not planning to invade, although the White House claimed in January that it had uncovered a Russian plot to launch a “false flag” attack against itself to justify an invasion.

Although a member of NATO, Hungary has so far avoided criticizing Russia for the buildup. Instead, Budapest has taken a more neutral stance, advocating for calm and further negotiations between Russian and NATO officials. Hungary’s defense minister, Tibor Benko, claimed in a radio interview last week that Budapest would not deploy troops further eastward and would not request the presence of additional NATO troops on its soil, arguing that these steps would inflame the crisis and contribute little to Hungary’s ability to defend itself.

Orban echoed these thoughts on Tuesday, calling his trip to Moscow a “peace mission.”

“There is not a single European Union leader who wants a conflict with Russia,” Orban noted, largely avoiding the issue of the Russian troop buildup.

One of Russia’s demands to end the crisis has been a withdrawal of NATO troops and weapons from Eastern Europe—a zone that likely includes Hungary and would have a major impact on Budapest’s defense strategy. NATO officials, however, have refused to accede to that demand.