The Most Heroic and Horrific Battle of World War II for the Texas 36th Infantry Division. 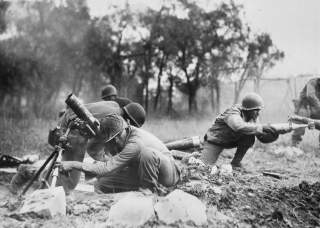 Editor's Note: You can read Part I and Part II here.

Almost immediately upon return to Texas after the war, the survivors of the Rapido disaster from the 36th Infantry Division met in Brownsville, Texas to discuss their need for justice. In their view, Gen. Mark Clark, the wartime commander of the 5th Army in Italy, had caused the unnecessary death and wounding of thousands of Texans from the 36th by his poor decisions at the Rapido.

Eventually they decided they would draft a resolution among themselves which termed the battle of the Rapido River which would “go down in history as one of the colossal blunders of the Second World War.” Through the Texas state Senate, they petitioned the U.S. Congress to investigate the matter to gain justice for their losses and ensure no future commander would make such grievous mistakes. The hearings were held before the House Committee on Military Affairs on March 18, 1946.

Wartime commander of the 36th Infantry Division, Maj. Gen. Fred L. Walker, was to be the first witness to testify. Clark had defended his actions, claiming that Churchill’s desire to land a large force at Anzio and theater commander Gen. Sir Herald Alexander’s order for Clark to press an attack from the south required him to make tough choices. In his postwar memoirs, Clark wrote that the 36th Division “was a fine outfit” that performed a critical role at the Rapido. “I salute them for their charge and courage,” he continued, but “as for myself, I can only say that under the same circumstances I would have to do it over again.” That certainty is part of what motivated Walker to testify.

The men of the 36th did not complain about Alexander’s orders to Clark. In fact, Walker said he felt “the directive was a proper one from a strategical point of view.” The problem, he said, “is that poor judgment was used in the selection of the point of attack and in the manner in which the directive of General Alexander” was applied tactically. “I do not recall of ever having read in military history where a frontal attack across an unfordable river in the face of an organized position along the opposite shore has ever been successful.”

“While it is wholly understandable that Clark was under pressure to get the attack carried out on time because of its impact on the landings scheduled for Anzio,” Walker added, “it does no good whatsoever to continue the attack on time if the likelihood of failure is almost guaranteed.” This was the key point Clark failed to grasp—because it was not the only option Clark was presented for complying with Alexander’s orders.

Walker had pointed out to Clark five times that there was another location, barely a mile and a half further up the river, where a crossing was very much possible, even with the other negative factors at play. “In that area,” Walker explained, “tanks could follow infantry effectively. That was the areas where I recommended to General Clark and General Keyes that the attack across the Rapido be made . . . As a matter of fact, later on, the troops of the Thirty-fourth Division made a successful attack in that area.”

During World War I, Walker had won the Distinguished Service Cross for his leadership defending on a river bank against an attacking force and knew, intimately, the factors that would lead to either success or failure. His warnings of failure prior to the attack on the Rapido River in January 1944 were borne out, in precise detail. Further, he suggested an alternative location to make the attack that would still have accomplished the higher commander’s strategic intent—which was later also proved, in intimate detail, to have been correct.

During the congressional hearings of March 1946 Walker and three other veterans of the 36th Division explained these critical points as members of the House and Senate listened. In his closing remarks Walker explained why he felt it important to examine the military disaster:

Gentlemen, this is the way I see this thing. I believe that military commanders in high places have a responsibility to the relatives and friends of the men who are serving under them, as well as to the men themselves, and I feel that they should be capable of using good tactical judgment in order that they may reduce losses and at the same time accomplish the results desired. I feel that an investigation of incidents such as this attack that you are now discussing, by your committee, would serve to alert commandeers in the future that they will be called before a court of judgment, you may call it, and with the feeling that they may have to answer for their acts. They will be a little more cautious, a little more considerate, and a little more capable. Clark, however, was never called to testify. Eisenhower felt it wasn’t necessary. Secretary of Army (then called Secretary of War) Robert Patterson conducted an investigation of his own and eventually concluded that “it is my conclusion that the action was a necessary one and that General Clark exercised sound judgment in planning it and ordering (the attack on the Rapido).” While the casualties “are to be greatly regretted,” he continued, “the heroic action and sacrifices of the Thirty-sixth Division undoubtedly drew the Germans away from our landings at Anzio during the critical hours of the first foothold, thus contributing in major degree to minimizing the casualties in that undertaking and to the firm establishment of the Anzio beachhead.”

His statements were unambiguously wrong. Clark’s actions clearly did not represent “sound judgment,” and most assuredly the attacks had not the slightest effects on the Germans and thus no impact—positive or negative—on the Anzio operation.

But the War Department was in no mood to punish one of its senior commanders. They were tired of war and wanted to end the whole messy affair. Justice for the men of the 36th whose lives had been sacrificed for no purpose, for the survivors who had to live with the knowledge of the truth, and the family members of the fallen who would suffer the rest of their lives were given little consideration.

The Congress’ inaction and the secretary’s white-washing of the matter would be one final wound inflicted on the survivors of the most heroic, horrific battle of World War II for the Texas 36th Infantry Division.

Image: Members of a mortar company of the 92nd Division pass the ammunition and heave it over at the Germans in an almost endless stream near Massa, Italy. This company is credited with liquidating several machine gun nests. Wikimedia Commons