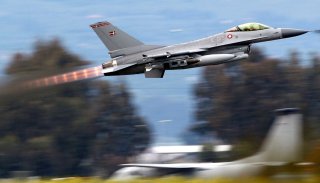 The Baltic Sea can be a crowded place. 145,000 square miles of sea is shared between Russia, Finland, and Sweden, as well as the three Baltic states, Poland, Germany, and Denmark – the latter of whom are all members of the North Atlantic Treaty Organization (NATO).  This can make for tense relations, and because the Baltic Sea would be one of the major air theaters of any future conflict between Russia and NATO, all nations have flown extensive sorties through the international airspace in its center, testing the other sides’ response times.

On June 15, a pair of Russian bombers, surrounded by fighter escort, took part in an 8-hour flight over the Baltic Sea. In total, two Russian Tupolev Tu-160 “Blackjack” bombers, two Sukhoi Su-27 “Flanker” fighters, and two Su-35 “Flanker-E” jets took part in the mission. The Tu-160s were part of the 121st Guards Heavy Bomber Aviation Regiment, as this regiment is the only one that still flies maintained Blackjack bombers. The regiment in question operates from the Engels-2 Air Base, in south-western Russia’s Saratov Oblast near the Caspian Sea; the bombers appear to have flown from Engels-2 to St. Petersburg, then into the Baltic.

The Russian flight quickly triggered a Quick Reaction Alert (QRA) for NATO aircraft along the southern coast of the Baltic Sea, and planes from a handful of nations were scrambled to follow the Russian flight. Italian F-35As, Danish F-16s, and Swedish JAS 39 Gripens took part at various times, following the Russian planes from a distance. The NATO forces were stationed in Amari, Estonia.

In a press release concerning the event, the Russian Ministry of Defense described the procession, estimating its flight time at roughly eight hours. The Defense Ministry underlined that Russian flights were regularly conducted over neutral waters, and emphasized that “All flights of aircraft of the Russian Aerospace Forces are carried out in strict accordance with the International Rules for the Use of Aerospace.”

Tuesday’s flight comes one week after a close encounter off the coast of Estonia between an Italian F-35 and a Russian Su-30SM “Flanker-H” jet. The Russian fighter jet was escorting an Antonov A-12 transport plane to and from Russia’s separated Kaliningrad Oblast.

No pictures were released from the incident; however, it is possible that NATO will clear photographs or videos for release in the coming weeks, as it ultimately did from a similar interception in May.