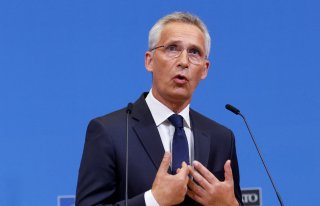 NATO issued a statement on Tuesday asserting that any use of nuclear weapons by Russia in the ongoing war in Ukraine is “absolutely unacceptable” and would have “severe consequences,” Reuters reported.

“Any use of nuclear weapons is absolutely unacceptable, it will totally change the nature of the conflict, and Russia must know that a nuclear war cannot be won and must never be fought,” NATO secretary-general Jens Stoltenberg said.

“When we see that kind of nuclear rhetoric again and again from Russia, from President [Vladimir] Putin, it is something that we have to take seriously—and therefore we are conveying the clear message that this will have severe consequences for Russia,” he continued.

Stoltenberg’s remarks came on the same day as Dmitry Medvedev, a former Russian president who now serves as deputy chairman of Russia’s Security Council, outlined a potential scenario of a nuclear strike on Ukraine. He predicted that the U.S.-led NATO military alliance wouldn’t directly enter the conflict in response because it would be too afraid of a “nuclear apocalypse.”

“Let's imagine that Russia is forced to use the most fearsome weapon against the Ukrainian regime which had committed a large-scale act of aggression that is dangerous for the very existence of our state,” the longtime ally of Putin said.

According to Reuters, Medvedev’s comments essentially quoted one of the conditions of Russia’s nuclear strike doctrine: “aggression against the Russian Federation with conventional weapons when the very existence of the state is threatened.”

“I have to remind you again—for those deaf ears who hear only themselves. Russia has the right to use nuclear weapons if necessary,” Medvedev continued, adding that it would do so “in predetermined cases.”

“I believe that NATO would not directly interfere in the conflict even in this scenario. The demagogues across the ocean and in Europe are not going to die in a nuclear apocalypse,” he added.

This past weekend, Secretary of State Antony Blinken and National Security Adviser Jake Sullivan warned of “catastrophic” consequences if Russia ever decides to use nuclear weapons.

“We have been very clear with the Russians publicly, and, as well as privately, to stop the loose talk about nuclear weapons,” Blinken said in an interview on CBS News’ 60 Minutes. “It's very important that Moscow hear from us and know from us that the consequences would be horrific. And we've made that very clear.”

Meanwhile, Sullivan told NBC News’ Meet the Press that the consequences “would be catastrophic if Russia went down the dark road of nuclear weapons use.”