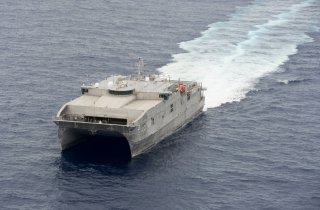 EPFs are high-speed vessels that can carry 600 tons of troops, weapons, equipment, ammunition, and armored vehicles.

The service’s 12th Expeditionary Fast Transport (EPF) ship, the USNS Newport,  completed integrated sea trials two years ago. The trials are a demonstration exercise meant to prepare the ship for full-scale operations by conducting maneuvers, transport missions, and reconnaissance operations. Able to travel at speeds of up to thirty-five knots over distances as far as 1,200 miles, the ships bring a new element to the Navy’s expeditionary warfare strategy.

The Navy also recently tested an unmanned EPF capability by conducting “uncrewed logistics prototype trials,” according to a new report in Naval Technology. The unmanned ship traveled from Mobile, Alabama, to Miami, Florida as part of an early prototype demonstration of unmanned operational potential.

While classified as “non-combatant” vessels, EPF ships are not armed with weapons but engineered for humanitarian and disaster relief missions. For example, in August 2021, EPFs were used to provide critical support to earthquake victims in Haiti. However, the ships are able to participate in major combat operations by transporting soldiers and vehicles. As an article in the Marine Corps Gazette explained, “Marines are hopeful to receive the first LAW by 2026, whereas the EPF can currently provide company-level ship-to-shore connectors until the LAWs can matriculate into the fleet.”

An unmanned EPF enables the low-risk transportation of logistics, supplies, weapons, and ammunition, while also giving commanders the option to conduct coastal surveillance missions in high-risk areas exposed to enemy fire.  As an unmanned vessel, a drone-EPF could also conduct strikes from forward locations while sailors verify targets from afar. As a larger ship, it could carry larger weapons than a smaller drone boat or unmanned surface vessel (USV) and act as a forward surveillance node in high-risk areas.