The Navy Has New Plans for Its Expeditionary Fast Transport Vessels 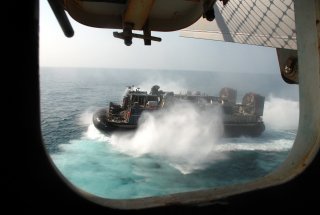 The ships, in development for many years, help enable the Navy as a high-speed maneuver force able to perform a wide range of operations. These operations include humanitarian assistance, medical support, special operations transport and the fast reinforcement of troops, supplies, equipment, and weapons. Over the years, the Navy has over been expanding and evolving its mission set in new directions. That is because the force has been moving toward Distributed Maritime Operations due to their large volume and open design concepts.

The often under-recognized EPFs have been supporting combat operations and training exercises in vital strategic areas to include the Black Sea, the Arabian Gulf, and throughout U.S. Pacific Command and U.S. Southern Command. Russia has been tracking the EPFs in the Black Sea, according to a Defence Blog report. The presence of Expeditionary Fast Transport vessels in the Black Sea is particularly crucial, as U.S. Navy warships such as destroyers often patrol to show force and deter potential Russian aggression in the region. This is vital to key NATO allies along the coast of the Black Sea such as Albania and Bulgaria.

Interestingly, EPFs have an impactful role beyond the ship’s combat support functionality. The vessels are used for crucial, life-saving humanitarian missions and recently provided support to the U.S. medical response to Haiti’s devastating 7.2 magnitude earthquake. The USNS Burlington (T-EPF-10) was immediately sent to the disaster area to deliver supplies, transport key personnel, offer medical assistance, and employ its deck-launched ScanEagle drone to survey the area of destruction in support of rescue workers and emergency responders. This has helped responders ascertain which airfield can be used and where there might be pressing needs in support of victims. With a reconfigurable cargo bay, the ship can transport injured personnel and rely upon its shallow draft to access shallow island areas and ports. A Navy white paper on the EPF says the ship has a shallow thirteen-foot draft and even operates with additional “fixed berthing,” which could transport patients and injured personnel.

“The EPF has a crew of 26 Civilian Mariners with airline-style seating for 312 embarked troops and fixed berthing for an additional 104,” according to the Navy white paper.

“The EPF Flight II variant will have considerable changes for medical facilities, including a multi-bed intensive care unit, two operating rooms, and berthing for a medical team of approximately 100 personnel,” according to a statement released by Austal at the Sea Air Space Exhibition. “Its flight deck will be capable of landing CH-53 helicopters and V-22 aircraft.”